Last month the NRL released the official draw for the 2023 NRL season and as has come to be expected round one was the talking point.

Fans have seemingly come to believe over the years that round one needs to be brimming with marquee matches but don’t realise that doing so would harm ratings and attendance to an extent later in the season.

Round one itself is a draw as it is the first time many fans have seen their team play since October at the latest.

Casual fans also often tune into most games during the first round to see how each club is shaping up for the season ahead.

It would be a poor business decision on the NRL’s part to schedule games that are guaranteed to draw tv ratings and a big crowd in round one because they would then in turn be preventing themselves at least one opportunity to do so later on in the season.

The biggest problem fans seem to have with the round one schedule is that The Dolphins and Brisbane Broncos are not playing each other in the first round which is ludacris.

No matter who The Dolphins verses in their first-ever NRL game people will flock to Suncorp Stadium and tune in at home as The Dolphins making their doubt is the draw and no matter where the first meeting between The Dolphins and Broncos is placed in the 2023 draw it is guaranteed to draw a huge crowd and do great ratings on television.

If the NRL had scheduled The Dolphins versus the Broncos in round one then the NRL would be wasting two massive drawing cards on one game when they could have generated big ratings and a huge crowd for two. 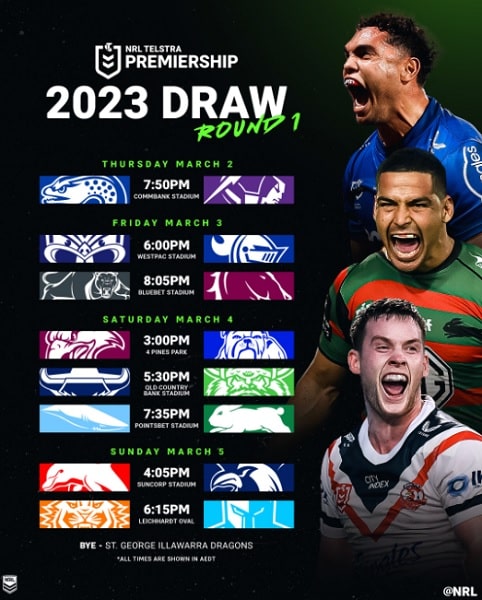 There is only one thing that needs to be taken into account when looking at what makes a strong opening round and that is relevancy.

Matchups that currently have intrigue based on the events of the previous season but risk interest fading away later in the year are the perfect drawing cards for an opening round and for 2023 in particular the NRL has done this very well.

For example, the Cronulla Sutherland Sharks and South Sydney Rabbitohs game on the first Saturday of the season will be a big draw as the Rabbitohs eliminated the Sharks from the finals last season and that game is still fresh in the minds of fans.

However, neither side has any long lasting history of animosity so if the NRL was to wait too long to schedule this fixture then fans have moved on from the 2022 elimination final and unless both sides are towards the top of the table and are in form then it certainly will not be as big a draw.

The ‘relevancy factor’ comes into play for most other games scheduled for round one also for their unique reasons.