When the 1895 Cup came into being prior to the 2019 season, it created a division. There were proponents who felt it was a good idea to give lower league sides the chance to get to Wembley whilst critics proclaimed it no more than a “Mickey Mouse” competition. Yet, this past weekend showed just how important it is and can be for second and third tier sides.

Sheffield hosted Batley in the first semi-final, with the Eagles beating Batley 18-2, whilst Widnes triumphed at Leigh, 12-8. Though Halifax reached the Challenge Cup semi-finals, they were the first Championship side to do so since Hull KR way back in 2006.

It’s common knowledge that sides outside of Super League very rarely get the chance to play in the capital in a final. With the introduction of a new cup competition where the two finalists get the chance to soak in the Wembley atmosphere, there is a new impetus for teams rather than just a run-of-the-mill league season.

The joy of a new cup was evident at the weekend. The scenes in the stands and on the field when Sheffield beat Batley and Widnes succeeded against the odds at Leigh were enough to justify this created competition. The joy shared by the winning sides proved that getting to Wembley still has that added magic. 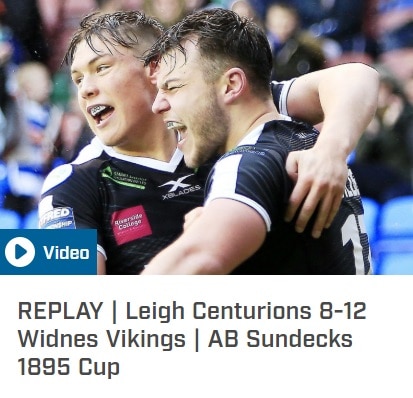 In its inaugural season, the 1895 Cup is certainly not perfect; it’s midweek games for part-time teams in particular has been problematic. But, it is something that should stay.

The only downside to getting to the final is that the game will be played after, not before, the Challenge Cup final. In what should be a curtain raiser as Super League crowds flock into the stadium, it will be played in front of a largely soulless Wembley with the majority of supporters having left at the end of the “main” event.

It will almost be like the forgotten festival and, even then, those that do stay will likely not get home until the early hours of the morning due to a late finish. Rugby League always seems to be shooting itself in the foot and, if attempting to attract new spectators, having a half seven kick-off is not the way to do it.

Sheffield and Widnes fans should enjoy the whole occasion, the latter in particular after seeing their club go through difficult times recently. There is something special about travelling down to Wembley and seeing your team parade onto the famous, hallowed turf. Now, thanks to the 1895 Cup, any club outside Super League has the chance to taste success in Britain’s greatest stadium.