England captain, Sam Tomkins, believes that Saturday’s clash with the Combined Nations All Stars is ‘really important’ not just as a stand-alone fixture, but for preparation for the World Cup at the end of the season.

Tomkins, 33, returns to the England squad after missing the match against France in October due to injury. On his return, he has been awarded the captaincy by former Wigan Warriors head coach, Shaun Wane.

The England full-back says that the entire week has been crucial to the squad and will be vital ahead of the World Cup.

“It’s a really important game,” said Tomkins. “It’s a big part of our preparation for what’s to come at the end of the year.

“We don’t have the luxury of having a pre-season like you do at club level, where you iron out any problems and build some cohesion.

“Having a week in camp together before a game I think is vital for our preparation. Being around each other in training is equally as important as the actual game.

England face a Combined Nations All Star side coached by Ellery Hanley tomorrow as part of a double header at Warrington’s Halliwell Jones Stadium with England women facing France women at 3:15 PM.

Tickets for the men’s and women’s double-header at Warrington’s Halliwell Jones Stadium are available to buy now from only £20 Adults and £10 Under 16s at eticketing.co.uk/rugbyleague.

England will be looking to avenge the 26-24 defeat suffered last year to the All Stars and Tomkins says it is key for England to end this week with a victory.

“Nobody wants to lose,” he said. “We are all competitive as sportsmen.

“Last year we had some good prep and made some steps in the right direction, but we didn’t get the result. It’s important that we finish off a good week in camp with a win.”

England head coach Wane named 11 changes from the side who defeated France 30-10 in Perpignan in October 2021. 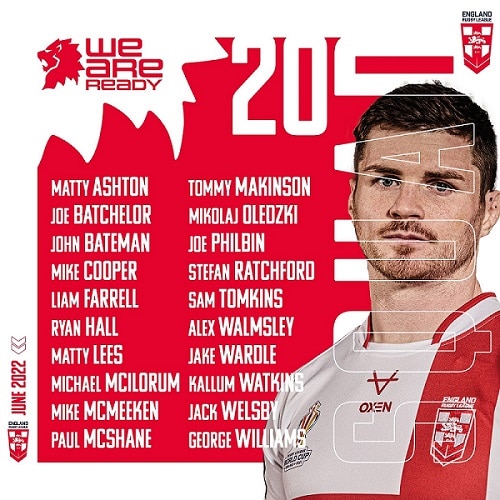 Catalans Dragons teammates, Mike McMeeken and Michael McIlorum both return to the England squad. McMeeken will make his first appearance in an England shirt since the 2017 World Cup, meanwhile McIlorum last featured for England against France in the 2013 World Cup.

Tomkins believes that his Catalans teammates have been recognised for their strong performances this season.

“They have been two of our best players this season,” said Tomkins. “Micky has been probably our best, it’s testament to him at 34 that he’s still improving.”

Matty Lees, Joe Batchelor, Jack Welsby and Jake Wardle will all make their England debuts. Whilst England’s top try scorer, Ryan Hall, returns to the squad after an absence.

Both England and the Combined Nations All Stars will be wearing Tonga-inspired jerseys to help aid the relief fund, following the devastating volcanic eruption and tsunami that struck the country in January. Full details of the special Tongan-themed jerseys which will be worn by both the All Stars and England teams, raising money for the relief fund. Buy the shirts here.

Kick-off for England’s men against Combined Nations All Stars gets underway at 5:45 PM at the Halliwell Jones Stadium in Warrington. This follows the England’s women against France women, which kicks off at 3:15 PM.