A two-part series focusing on both international and domestic success of rugby league in Norway.

Norway, a Scandinavian country of 5 million people isn’t usually a topic of conversation with most rugby league enthusiasts. Rugby league has made very significant progress in this land of fjords and glaciers over the last ten years.

The strength of a sport can often be analysed by the strength of its domestic competition. It’s one thing to compete on the international stage by bringing in players who’s’ grandparents were born in the country in question, it’s another to grow a domestic competition from scratch and use those players to succeed on the international stage. A good example of this is Ireland. Rugby league is the 49th most popular sport in Ireland yet the country is able to field a vastly stronger international team based on Irish heritage, English born players if it so wishes. Only now are they truly realizing the importance of fielding genuine home grown domestic players. This is something Norway first realised around five years ago, when tough decisions were made around culling many “expat” players.

Norway is now as little as two wins away from appearing in their first ever Rugby League World Cup. This is no mean feat. The national side will take on Greece in London on May 18 to determine which nation will advance to the final group stage of the 2021 World Cup qualifiers. The team got to this stage after a narrow 20-12 loss to the Czech Republic followed by a dominate display in a 40-22 win over Germany to finish top of European Group C North on points differencial.

The team is under no illusion about how difficult the task of progressing will be.

“We’ve got to be realistic. While it would be amazing to make the World Cup, we’re up against a very good Greek team with access to some very good players. If we manage to get the win, we meet two very tough teams in Scotland and Russia. My priority is to grow the game here in Norway, and if we can upset a few sides, hopefully we can get more exposure and eventually get recognised by the Norwegian governing body”, national coach David Hunter told Everything Rugby League.

Rugby League Norge Chairman Lee Johnson shares a similar vein of pragmatic optimism adding “Greece have a stronger team but the Norwegian team have 90% grown up around playing with each other and the team structure is more like one big family when the team meet up and play. All of this helps out and they all know each other’s ability’s on the players around them so this gives us something quite unique”.

Fellow ERL contributor Stuart McLennan recently revealed that the crucial match is likely to be staged before the London Broncos Super League clash with Wakefield Trinity at the Trailfinders Sports Ground. If the game can’t be played at Trailfinders it will be held at New River Stadium before the London Skolars vs Doncaster match scheduled for the same day.

During the qualification stages, Norway have used almost exclusively domestic, born and bred Norwegian players. The only exceptions to this was a player from the Saddleworth Rangers in England along with another from the Woden Valley Rams in Australia.

“Four years ago we came up that we had to get rid of a lot of expat’s and look at getting the young Norwegians to a level that they could compete in playing rugby league in Europe. We knew that to start with we would have some big losses but after some time investing in these players and growing them both as players and a team we would turn a corner. With nine wins in the last ten games I believe that we made the right decision in trusting and growing home grown talent.

I think that players now understand the game and have pride in themselves, their teams and the national team. This year for me at the try outs for the National team, I saw firsthand a player that has come back three times over three years to try and get into the team, each year getting better. This year he showed everything we want out of our national players, to the point where he has been one of the top players on the pitch both in the national team and in the domestic comp. This is happening more and more with the young players” says Lee.

David puts coaching the national team to this stage of the World Cup Qualifiers as one of the biggest successes during his time with rugby league in Norway. “Playing in these World Cup Qualifying matches has been a bit of a landmark for us. I didn’t think we’d be this involved so to make it out of our group has been a great experience”. 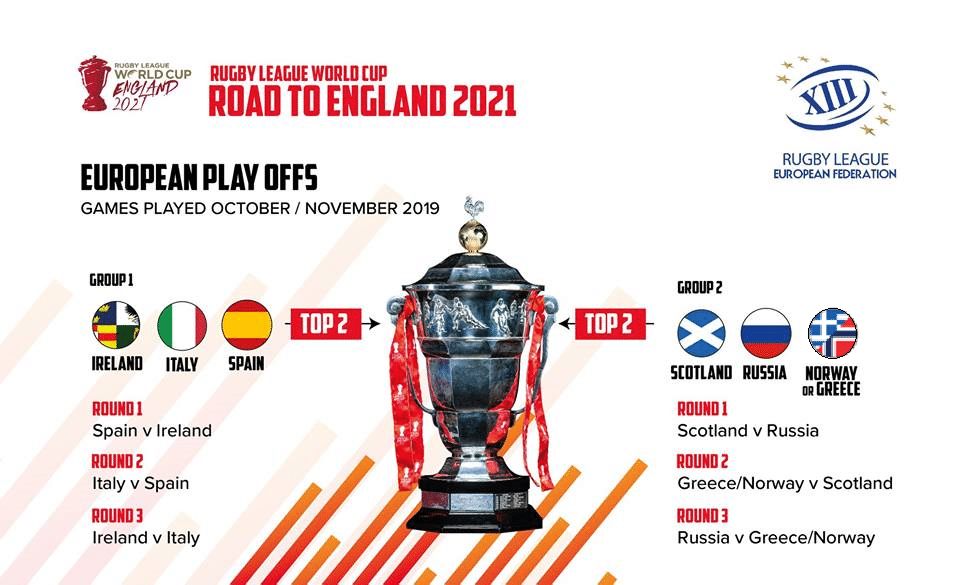 Norway’s international rugby league presence doesn’t just stop at its senior men’s team. In 2017 the country had their first ever junior international against Serbia which David describes as a highlight despite the team being well beaten. In addition to this, a high school team, Nannestad Norsemen travelled to Serbia last year and are this year playing matches in the Czech Republic. Not bad for a team rarely mentioned in the rugby league vernacular.

The Rugby League International Federation (RLIF) oversees a weighted ranking system. This system grants more ranking points for more high profile and important international matches. Currently, Norway is ranked number 20 in the world. The longer the team stays in the 2021 World Cup Qualifying stages, the more ranking points there will be on offer. Breaking into the top 20 is one thing, doing it with almost solely domestic, home grown players is even more impressive.

Norway, USA, Ireland and a few other developing rugby league nations around the world are starting to see their domestic first strategies bear fruit.

In the second installment of this two-part series on Norway, David and Lee will give an overview of the domestic rugby league scene in Norway and tell readers how they first found themselves running the sport in this Scandinavian sleeping giant.

“Best player I ever played with”: Mannah on Hayne