After being presented with what seemed like endless barriers, the battle of North America between the Canada Raven and the USA Redtails will be taking place on April 16th.

The Ravens hope to use the experience they gained from the world cup with players like Meg Pakulis and Christina Burnham who both played at the 2017 World Cup and were influential players to the team. They have also gained Gabriel Hindley who played in the Ravens Serbia tour and did a short stint with the North Sydney Bears in 2020 before the pandemic hit.

Experience for the Redtails comes in the form of rugby union players switching codes to learn league, not much different from a large portion of the Ravens. With a lot of the Retails having experience with the top competitive divisions of rugby union in the US they are bound to bring a very fit and physical team to the competition. Samantha Black-Keels, captain for the Redtails, will be one of the top players to watch having played in the domestic season with Tampa Mayhem Rugby League at No7. Other players to watch for will be hooker Nicole Fisch and lock Cait King. 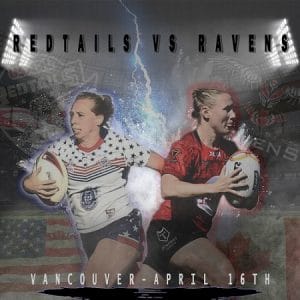 Both teams mentioned that size and athleticism in their forward packs will be beneficial to their game plan. While the Raven added that having the speed of players like Ferris Sanboe, Ashley Holt, and Petra Woods, who all played in the inaugural Canada East vs. West game in 2020, in the backs will be a big benefit to the team, the Redtails will be looking to use their more experienced players to stay calm under the pressure of their first international match looking at the above mentioned Sam, Nicole, and Cait to help drive their calming force.

The Ravens are the favourite to win with the team having the experience of a world cup under their belt and with a lot of the players having played together before, whether on union teams or on provincial representative teams. This being said I wouldn’t write this off as an easy game for them, the Redtails are bound to be hungry for a win in their first international match.