The South American nation of Chile hasn’t taken to a Rugby League field for over three years. Like all rugby league playing nations, the Covid-19 pandemic ensured progress in spreading the rugby league gospel had to be put on hold.

Chile isn’t exactly a nation synonymous with rugby league and even the most ardent international rugby league fan was pleasantly surprised when the country of 20 million people became the first South American nation to participate in the later stages of the men’s Rugby League World Cup qualifiers. Although the team suffered a heavy 62-0 defeat at the hands of the USA, their presence in the tournament showed just how far they’d come in a short period of time.

Saturday’s games against the Philippines represents the first time a Chilean Rugby League jersey has been donned since the world cup qualifiers. Originally pencilled in for Lidcombe Oval in Sydney, the match has been moved to Pioneers Park in Malabar due to inclement weather, the synthetic pitch ensuring the contest won’t descend into a mud pit.

“It’s a good chance for us to see what players can go to another level. That’s how we’re approaching this game”. 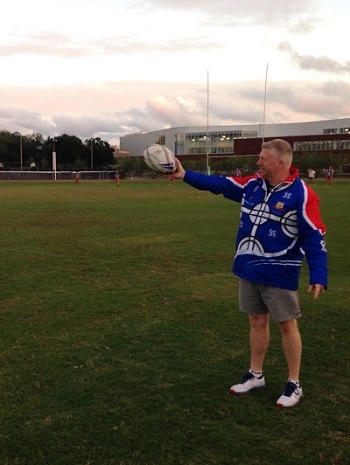 Chile has a short but eventful existence in the rugby league world, having played a total of 7 games; managing 3 wins, 3 losses and a draw. The one draw came against Thailand in 2017 and represents the only game to date that Chile have come up against an Asian opposition. This game wasn’t too long after the countries inaugural international game against El Salvador, where the new team ran out convincing 58 – 20 victors

In a situation quite similar to the rugby league team, Chile’s rugby union team are now only a game away from qualifying for the 2023 Rugby World Cup in France and Andrew hopes this increased interest in the rival code helps to drum up support for rugby league in Chile as well. “We’re hoping to get some of the action too. Chileans have a natural athletic ability”.

In a somewhat poetic twist, this weekend’s game being moved to a ground named Pioneers Park brings an element of irony, as Charles teams up with now assistant coach John “Squizzy” Taylor. Charles assisted Taylor in the early days of the Australian Jillaroos (women’s) team. “I was John’s assistant coach in 1996 and 97’. The Jillaroos first came about in 1995. Game two was the girl’s first win. It came against Great Britain in Canberra”. The Jillaroos went on to lose this serious but a coaching partnership would be formed that year, one which reunites this weekend after 26 years.

While developing rugby league on the ground in Chile remains the fundamental long term goal, Charles is also looking to attract the interest of NRL players who are part of the Chilean diaspora. Current NRL players Marcelo Montoya and Matt Croker are eligible for Chile, while Harry Croker, Mitch Black (both Newcastle Knights) and Diego Bravo-Graham (Canterbury Bulldogs) are eligible players expected to make their NRL debut in the near future.

🎬 CUT! If at first you don't succeed, make a blooper reel of the funniest mistakes!

While Chilean rugby league provides cause for optimism, there are also other countries in South America blazing a trail, thanks to the tireless efforts of people on the ground. An example of this is Brazil, who are now full members of the International Rugby League (IRL) and are set to field a team in the upcoming Women’s Rugby League World Cup in England. Brazil and Chile will lock horns in the South American championship, to be staged in Columbia later this year. The winner of this game will progress to the final stage of the France 2025 Rugby League World Cup qualifiers.

This weekend is going to provide a great litmus test to see where Chile is at. Unlike Chile, Brazil have played the Philippines in the past, losing the Magellan Cup 40-8 in June 2021. If Chile can upset the Philippines at 3pm on Saturday, they’ll be sure to go into the next round of world cup qualifiers with one over their South American rivals.