Scottish raids into northern England were a feature of life up until the 17th century.

In the south of Scotland, there are still famous tales told and ballads sung about the deeds of families like the Armstrongs, the Elliots and the Kerrs, famous Border Reivers whose raids into England became legendary.

Those Reivers have a modern day, rugby league equivalent now, in the form of the Edinburgh Eagles.

They reached the final of that competition in 2018, a feat which gave their move into the league real momentum.

The Eagles took the North East England competition by storm, winning the title thanks to an exciting golden point victory over Jarrow Vikings.

The Eagles beat the English side 38-34 at North Shields Rugby Club, completing a successful campaign that also saw them win the Scottish Cup by beating Strathmore.

Head coach Barry McGuffog is delighted with the way that the team has performed in 2019.

“It’s been a fantastic season for us, winning the Scottish Cup and then winning the North East League,” he told Everything Rugby League.

“We were predicted to finish third in the North East League, based on results last year, and obviously we’ve gone a couple better than that.

“It’s been a fantastic season and we’re certainly not going to complain about it!”

The nature of the victory in the final was also very gratifying for McGuffog, with the Jarrow Vikings providing tough opponents.

“We’ve had a couple of good games against Jarrow this season that have been pretty close,” he said.

“So we knew it was going to be another tight fixture.

“We came from 18 points down against Strathmore in the Scottish Cup final, so we knew we were capable of coming from behind.

“We came back from 16 points down against Jarrow at half-time to lead by four with a couple of minutes to go.

“Then they tied it up and we were fortunate enough to get the golden point in the end.”

McGuffog is particularly pleased by the way that the youth set-up at the club is working.

A number of Fijian families with connections to the British Army have settled in the Edinburgh area in recent years, and many of the sons of these families are now playing rugby league for the Eagles.

Those players of Fijian background provided a powerful base for the club’s first Under-16s fixture against Strathmore earlier this season.

“Strathmore have had an Under-16s team for a couple of seasons now, and we decided that if we want to continue building for the future we need to have some kind of roots,” said McGuffog.

“So we started at Under-16s. It was more of catchment age group as much as anything else against Strathmore.

“There were a couple of lads who were probably at the top end of the Under-14s who played Under-16s as well.

“Obviously we got quite a lot of attention because a lot of our guys are of Fijian descent, though they are Scottish qualified.

“There’s a couple of British Army bases up here in Edinburgh, the families might not all be in the Army now, though they certainly have been in the past.

“They’ve settled up here and the community is really tight, so we’ve got four or five Fijians in the open age set-up now.

“One of them had a couple of younger brothers that were playing in the Under-16s, he’s invited his mates along and we’ve ended up with up to 19 different Fijians playing for this club at various times this season.

“They are all Scottish qualified, though I believe on was born in England and one in Ireland.

“But they’re all Scottish qualified, they’ve all spent 10 years of their lives here.

“They are all Army families, and the community is really tight, so they’ve all got involved.

“A couple of them are on the Scottish Rugby Union pathways, so we’ve just got to convince them that rugby league is the way forward.

“We’re hoping that the way we’re going, playing in the North East England league – certainly with Newcastle Thunder having a reserve grade next year and dropping Under-19s to 18s next year – it might create a bit of a pathway for our lads.

“Or Scotland’s untapped market of talent – for want of a better expression.” 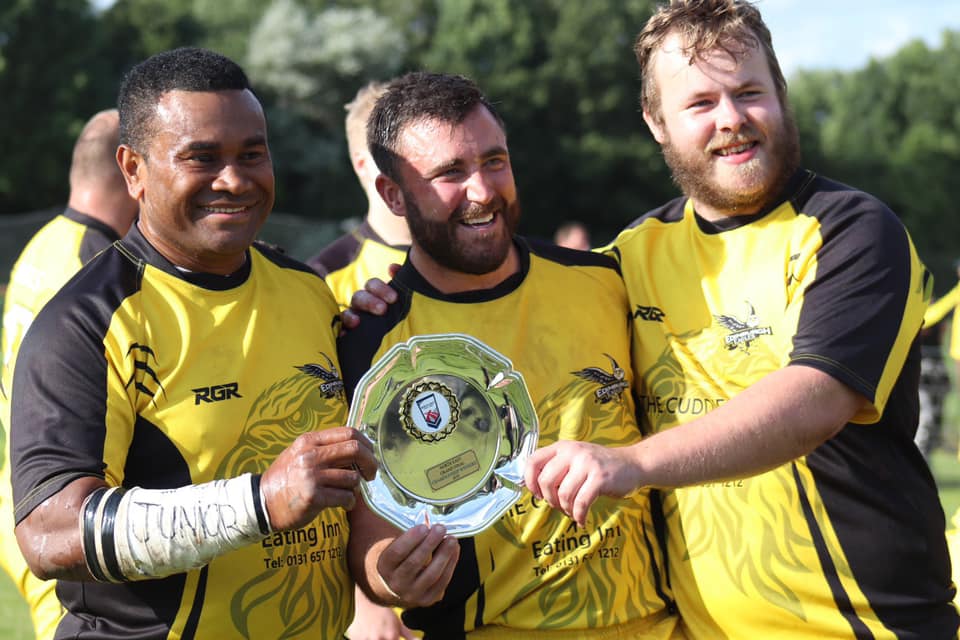 Another man who has been key to the development of the club is Scotland international centre Craig Robertson.

Robertson is a Borders man from Galashiels, and like many folk from that part of the world has rugby of all kinds running deeply through his blood.

He has taken on the role of assistant coach at the club, and has played a key role during the campaign.

“I came back to play with the Eagles last year,” he explained.

“There were boys not turning up, and they were getting a bit of, well, not a bad name, but…so I thought I could help out.

“So I went back to help out with coaching, and pass on some of the experiences I’ve learned with being in the Scotland squad, learning from the likes of Danny Brough.

“It’s invaluable what he told me, so it’s always good to pass that on to the younger boys and the less experienced boys that have been watching league, but have never got the opportunity to play league.

“Three years ago, Edinburgh were not even a product. Now, we’ve went on and won the North East Grand Final and the Scottish Cup – that to me was a massive success.

“If you’d said that to me at the start of the season I would have laughed in your face!”

The centre is also keen to stress just how much time has been spent on getting the Eagles up to a good standard this season.

“Games at home were relatively easy, because you’ve got everyone putting their hand up for selection,” he said.

“See when you’ve got a bus journey? Half the players wouldn’t commit – I could have turned grey overnight quite easily.

“It was bloody stressful. I was putting in at least 15 hours a week on a voluntary basis.

“But it’s good to look back on, and think, ‘I put in that much effort.’

“But you know what? Last Saturday afternoon made up for it.

“I’ve been in cup finals, I’ve won cup finals (in rugby union) myself, but it’s good for others, the boys that have never been in a final before, to get over the line.

“It’s good seeing all the smiles on the faces of the boys.”

As well as time, of course, there is also the question of money.

McGuffog revealed that the trip to Normanton Knights in the Challenge Cup last season cost the club something in the region of £1100.

Those kind of expenses make joining the NCL structure very difficult for the Eagles.

If the club is to progress further, it is vital that more sponsorship and other kinds of financial support are found.

But the fundamentals are now in place for something special to happen in the Scottish capital.

“There’s a lot of sponsors up here who are willing to contribute,” said Robertson.

“But it’s about attracting the right kind of players. Yes, Newcastle find it hard having to travel all the time, but, you know what? An extra two hours on the bus doesn’t really mean anything.

“There’s a lot of potential up here, but it’s about getting to them young and getting them sorted.

“Our Under-16s team? There’s some boys there that look like handy pieces of work.

“We’ve got so much potential. These boys are too good to get wasted in union.

“We need to get into the schools and put the exposure in there.”