Photo by Picture by Allan McKenzie

Super League CEO Robert Elstone has called for greater unity in English rugby league and a change in the sport’s nature of political infighting and self-criticism.

Magic Weekend rolls into Anfield Stadium, the home of Liverpool FC, for the first time this weekend and the attendance is expected to be down significantly on previous years in Newcastle. Elstone’s decision to move Magic from St James Park has been questioned by many fans and media organisations.

But in a year where records have been broken for aggregate crowds at Easter and single game attendance in Barcelona, and a record commercial deal has been signed with sponsor Betfred this week, the 55-year-old wants more support from all stakeholders in the British game.

“Everyone I speak to outside of the game is talking Easter, Nou Camp, Anfield and saying ‘Wow something’s big happening’, Elstone told the By the Balls podcast.

“But then you turn and look internally and it’s ‘I’m not sure that’s the right decision’. We have to break that mentality, we have to change it.

“Unless we all get behind it, unless we all say isn’t it brilliant that Super League has got the foresight and ultimately the courage to go to this big venue and celebrate it. That’s a really good thing and lets get behind it.

“Politics and sport go hand-in-hand. What we can’t be is consumed by that. We have to set a clear vision of where we’re going and be positive and proactive.

“We have to hope fundamentally our actions bring people with us. The future is a very, very strong, elite flagship competition that everyone wants to be in, that stimulates interest in young people who want to play the game and people who want to watch it, and for that interest to not trickle down but flow out through the game.

“Unless we build a really strong flagship competition that everyone gets behind that people want to be in – that’s the governing body, that’s the junior leagues, the lower leagues, the community game, unless we have that flagship then we are going to struggle.

“What we can’t do is be consumed by politics. We have to get that unity through action, through vision.” 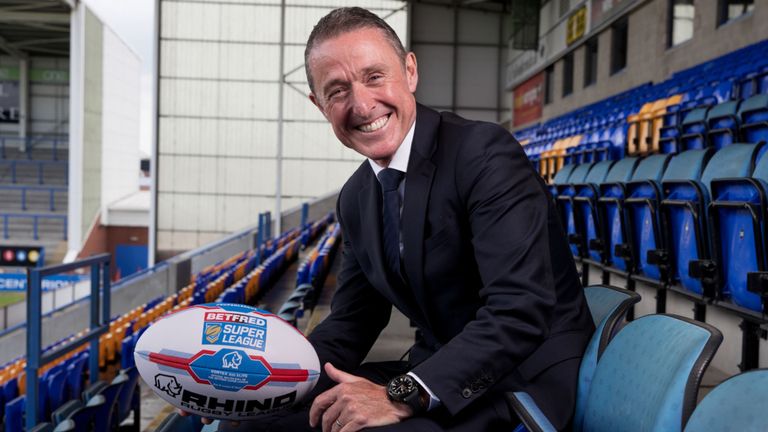 Twelve months on from taking on the role, the ex-Everton and Deloitte executive says he is “hugely excited about the future”.

“We’ve started the journey, we’ve delivered some good things but I’m keen that they’re not just flashes in the pan, that they are foundations for future growth,” Elstone said.

“We’ve bought into a number changes in the way the competition, changed the competition structures, we’re looking at rebranding and having a strong, solid, cleaner identity, we’re about to start preparing for those broadcast negotiations, so there’s a lot happening.

“I’m somebody who’s pretty self-critical, always wanting stuff done tomorrow, pretty forceful and prude myself on my energy levels, but maybe we should reflect on quite a lot of progress and recognize steps that have been taken.

“But fundamentally an exciting journey ahead.”

Asked if historically rugby league was too hard on itself Elstone, who worked for the RFL and Maurice Lindsay when Super League was created 23 years ago, said: “Like all sports we’re being marginalized. When you’re getting marginalize you perhaps become too self-critical, you look to chop and change too often, perhaps believe there’s a silver bullet out there and as a sport we’ve often searched for that.

“We’ve got to recognize the world of sport is significantly different, it’s hugely competitive and probably a little bit more need to hold our nerve, keep being ambitious but holding our nerve and all get behind it.

“Critically, unity for the sport is completely right. Unity with the RFL, unity with lower-division clubs and the community game. We all have to be bought into the sport’s future.”

Magic Weekend spent four years in Newcastle after leaving the Eithad Stadium after 2014. Elstone has defending the decision to move the event to Anfield in 2019 despite slow ticket sales.

“Anfield has a similar feel [to the Camp Nou],” he said.

“It is something special, there is real heritage, magic, mystique. You only have to go back a couple of weeks to see what Anfield is all about. For us to borrow it for a couple of days is terrific.

“Liverpool is a brilliant city with it’s distinctive personality. Anfield, as fans have pointed out, isn’t quite in the heart of it and it isn’t always easy to get back into the city.

“We’ll be doing loads of great stuff around Anfield. But just a short trip down the road is one of the most famous cities in the world so if you put all that together it is exciting.

“Every venue has pros and cons, I think Anfield and Liverpool came with a ton of pros. I think it was right for us to look to refresh.

“The whole concept of Magic is a celebration and finding new venues is a big part of that. So I think whilst fans love the fact that St James was right in the heart of Newcastle doesn’t mean we were going to be there forever.

“I think we’re taking it too a new city, a new stadium that isn’t quite the same but loads and loads of benefits and attractions. We’re hoping for a great crowd, anyone who’s going to go the games will see a great atmosphere.

“The whole experience is going to be hugely positive so we’re really excited about it.”

Elstone believes more thinking and strategy needs to go into taking matches abroad and to new cities to maximize the impact.

“Barcelona was amazing but it’s all got to be put in the hopper and thought through about why we’re doing it, what we’re going to get out of it and where it’s going to take us,” he said.

“That’s not to say we are committed for 2020, but dropping out doesn’t do us any good. There’s lots of positives and assets we can work on, it’s just finding the time to join it all up.

“Even in its own right going into Barcelona and everybody who went had a great time, one or two people saw Super League for the first time – that’s fine, that’s terrific.

“If that’s what we want to get out of it then that’s great and that’s a positive, there’s a lot of pluses in that. If it’s part of a longer-term strategy that’s about potentially a new club or a new region, or a new fanbase, then it just needs that thinking, it needs those dots to be joined up.

“Follow-through and legacy ultimately has to be right. Going in and out isn’t a bad thing, but you get some short-term media spike.

“We have had a lot of interest on it but it’s only as good as the follow-through and ultimately is it a series of games at the Nou Camp?

“Is it Barcelona FC adopting a junior rugby league team? Is it part of stimulus for south-west France? We just need to answer those questions.”

Minister for Sport, Tourism and Heritage Nigel Huddleston MP not only witnessed the…

Bedford is a historic market and the county town of Bedfordshire, Northwest of…