England Knights head coach Paul Anderson has finalised his 20-player squad for Saturday’s international against France B in Bordeaux.

Dupree becomes the second Salford Red Devils player, alongside Deon Cross, to earn international recognition at the end of a successful season for the Red Devils in which they reached the Betfred Super League Play-off Semi-finals.

Wardle, who spent much of 2022 on loan at Warrington Wolves from Huddersfield Giants, made a try-scoring debut for England’s senior side against the Combined Nations All Stars in June.

Broadbent, on loan at Featherstone Rovers from Leeds Rhinos in 2022, marked his England Knights debut in 2021 with two tries in a 56-4 win for Paul Anderson’s side against Jamaica. 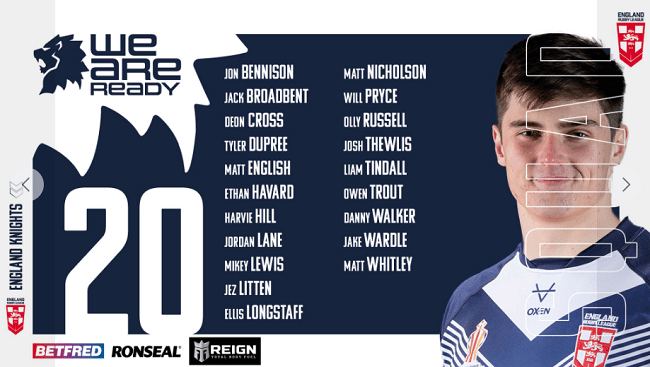 And following a promising season at Wigan Warriors, Hill was recently named in the Cumbria squad to take on Jamaica in a World Cup warm-up match next month.