The most northerly match official course held in Europe has taken place in Sogndal, an almost six hour drive north from the capital Oslo.

Seven candidates braved below zero temperatures to take the level one course which involved classroom sessions and outdoor practical elements in spite of the ice.

European Rugby League MO educator, Phil Smith, said “Like all countries progressing the game and increasing playing numbers, it’s vital that developing new match officials keeps pace. Those attending this course were raw and new to our game but enthusiastic to succeed. They now have the basics and confidence to get out on the pitch and ensure games can go ahead for the players.”

Mike Pride who attended the course and is behind bringing rugby league to Sogndal, noted: “We really enjoyed having Phil visit us here.

“All our players only started playing within the last year and the most experienced league man had only played one game. Phil set the level appropriately and brought everyone up to a standard so they could touch judge the day after the course. With support and coaching locally we will be ready to officiate when our season starts.”

“Rugby League Norge is pleased to see the spread of the game into new territory,” said president Anne Haigh. 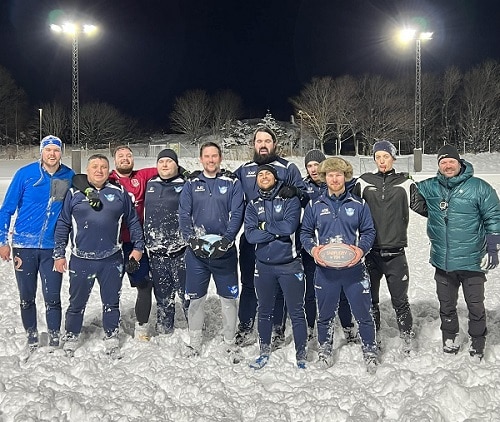 “The challenge for the Sogndal region is now to build on the foundations laid and establish their local competition where players and match officials can thrive. Continuing education will be a priority for the new officials to develop, as is establishing links with other regions where the game is currently played. New match officials courses are already planned for other areas in the New Year.”