The Western Suburbs Magpies capped off a stellar year in the Harold Matthews under 17s junior representative competition winning the final against Cronulla 42-16 and going through undefeated.

It is the first time the Magpies has won a junior representative title since 2002 when Bryce Gibbs, Liam Fulton and Ryan Hoffmann led the club to victory in the SG Ball final against Parramatta.

On the other side of the Wests Tigers joint venture the Balmain Tigers went into the SG Ball (under 19s) finals in third place before losing narrowly to the Canterbury Bulldogs. The Leichhardt based club last won the title when they went back to back in 2013 with a team featuring Jeremy Marshall King and Junior Tatola.

Wests Tigers made the finals of the Tarsha Gale Cup (under 19s women) and both MacArthur teams were finalists in the Andrew Johns (under 16s) and Laurie Daley (under 18s) Cups this year.

While there has been no shortage of talent emerging in Wests Tigers junior nurseries, retention of the best to NRL level has presented a major challenge.

Tough break for young hooker. Out for season…https://t.co/Izda9UnRWh

Betsey arrived following a successful stint as the Coaching and Development Manager at Cricket Australia, overseeing the growth and progress of many youngsters through cricket’s top academy.

Everything Rugby League spoke with Matt Betsey to gain a better understanding of his role at Wests Tigers and the plans for the pathways and junior development going forward.

STUART MCLENNAN: Matt you came to Wests Tigers from a coaching and development role at Cricket Australia. What experience and learnings did you take from cricket?

MATT BETSEY: “I was very fortunate to work at Cricket Australia and be involved in strategic initiatives that played a role in developing a system to support young talented players to achieve their dreams and explore their full potential. This included the implementation of a holistic development program that would focus on the basics of the game and the development of the whole person. It also included the development of coaches, the engagement of females as players, coaches and administrators, the importance of growing participation and the ability to commercialise sport to generate revenue streams to further invest back into the sport.

“I see enormous potential in the leadership role Wests Tigers can play in the rugby league landscape.”

SM: The Wests Tigers have been public about focussing on their pathways and junior development in the Campbelltown and Balmain regions. What does that mean in practical terms?

Our team to take on the Sea Eagles in Round 9! 🦅🐯https://t.co/5ckcn9vvsI pic.twitter.com/0rlIUCegAi

MB: “Firstly, the Board and Executive had the foresight and courage to heavily invest in Pathways and Development, myself and Brett Kimmorley commenced at the same time and have worked extremely hard to repay that commitment of the board.

“In many ways, we were fortunate to come into the role during a COVID lockdown last year, it gave me the opportunity to spend a lot of time on the phone calling players, coaches, administrators, fans and people across all areas of Wests Tigers and gather an understanding of what was working well and what could be improved. From that I built some priorities; it was important to build a long-term vision for the Pathways team that focused on developing and keeping local juniors; we needed a 5-7yr plan that all players and coaches could buy into; we need to enhance our presence in the South West and build an ‘academy’ in the Macarthur region; and we needed to build our women’s program to a point where we were ready for an NRLW license.

“There was strong feedback to say we needed to do this with open and transparent communication, and we have been working hard to deliver in all these areas.

“Whilst they are long-term priorities, we are starting to see some early signs that we are on the right track.”

SM: The Wests Magpies won the Harold Matts competition this year while Balmain finished third in SG Ball. Is that a result of the effort being put into pathways and junior development? 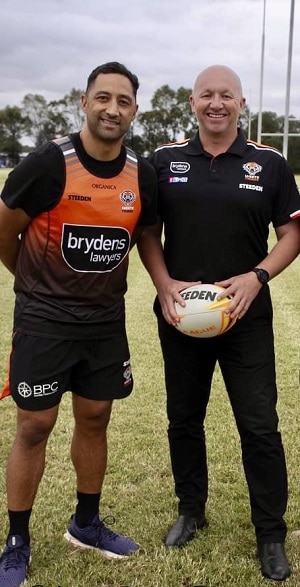 MB: “In some part, yes, Shannon Gallant and Paul Sironen are part of the Wests Tigers Pathways team driving the Wests and Balmain program forward and they have passionately nurtured a system to see those teams be able to play at their best.

“However, the reality is the Wests Harold Mathews team are a group of very good players who have been developing over the last few years and their coaches Nathan Lakeman (2021) and Robbie Mears (2022) deserve a lot of the credit for that teams’ success.

“Pleasingly, Wests Tigers had teams competing in all NSWRL Junior Representative finals series including our Tarsha Gale Under 19 Women’s team but winning is only one measure of building a successful system.

“I also want to see players developing and coaches growing to build long-term success. In many ways, I was most proud of the Wests SG Ball team who had 11 players that can return in 2023 and the way they improved over the course of the competition. This group will be joined next year by many of the Harold Matthews premiership players that makes for a very exciting future in the next 2-3 years.

“We also had the Group 6 Macarthur Wests Tigers Laurie Daley and Andrew Johns Cup teams make the finals for the first time – that shows our long-term depth and that we are building towards something special.”

SM: What are the plans for the future in these areas?

Our team to take on the Sea Eagles in Round 9! 🦅🐯https://t.co/5ckcn9vvsI pic.twitter.com/0rlIUCegAi

MB: “There is a lot of work still to do. I want to continue to develop and support our coaches – they are critical to the success of our journey.

“This year, we will do that through our CUBS program, where we get our best players across Wests, Balmain and Group 6 to come together for an intensive development program. The players and coaches will be supported by expert coaches and past players like Brett Kimmorley, Benji Marshall and Tim Sheens.

“Also, we are currently working with Campbelltown Council and Western Sydney University to develop a Centre of Excellence in Campbelltown, this is well overdue and will provide a home to the Wests junior programs and the presence in Macarthur that the local community so desperately wants.

“Also, we are hopeful of being successful in our bid to have an NRLW team – our Women’s program has all the ingredients to be a women’s rugby league powerhouse in Australia – watch this space!”

SM: Is WT looking at a club like Penrith as a benchmark in this area?

MB: “Penrith is just one of the organisations we are looking at for benchmarking. They have shown how an investment in their local juniors can turn to premiership success very quickly and, in terms of numbers, we match areas like Penrith, so similarly we are focused on delivering development programs to give our local players across Wests, Balmain and in Group 6 the opportunity to develop their skills – that’s our core business and Penrith have done it very well.

“However, we also look beyond Rugby League and at many industries or organisations that are focused on long-term sustainable development – we can learn a lot from other sports like soccer in Europe, the development systems used in Canadian Sport or through process driven organisations like Toyota.”

It's been over a year since Asu Kepaoa took to the field for Wests Tigers, and despite a gritty loss against the Dragons he's happy to be back https://t.co/ojV6PjoUOU pic.twitter.com/wrPggOsYgl

SM: When can we see the results of the pathways efforts trickle up to NRL level?

MB: “I think the Wests Tigers NRL team are currently building towards where they want to be – it can take time depending on the roster, salary cap and injuries at any given time and I know Michael Maguire and Tim Sheens are committed to the process of being better every day!

“What I am aiming to do is ensure that once they get to that point, there is a sustainable pipeline of local juniors and NRL level talent to choose from for many years to come.

“We have the Wests Harold Matthews group coming through, but we also have a wave of players in the Balmain system who will be equally exciting to watch which is why we need a long-term holistic development model in place for our local juniors to make Wests Tigers success inevitable and sustainable.”