Holders France will take on England in the final of the European U19s Championship on Saturday, after both were comprehensive winners in their semis.

Matthieu Garrigues, winger Kylian Benavent, Thibault Marty and Louis Grossemy from the bench all scored try doubles for the French, who got off to a blistering start with six touchdowns in the opening 26 minutes.

“We knew it was going to be tough and we had to impose ourselves from the start,” said Anselme. “If we began well and worked hard, we felt that we would have the advantage. We managed to keep our concentration and did a good job.”

Davyd Zazimko showed supreme pace, scorching 90 metres to score between the posts to open Ukraine’s account on the stroke of half time and was denied another long range effort in the second, Vitalii Romanov’s drop goal delighting the crowd on the hour mark.

England dedicated their win to assistant coach Gary McMahon, who tragically passed away at the team base on Sunday morning. 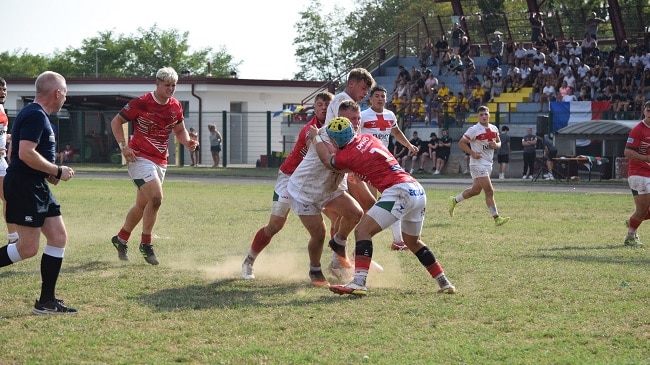 Keiran Welburn finished with 24 points from a try and ten perfect goals, Leeds Rhinos academy player Mekhi Bridgeman-Reany with a brace of tries after the hour.

Mason Phillips levelled for Wales early on but they trailed 20-8 at the break, and the Community Lions dominated the late exchanges.

Their head coach Allan Coleman commented: “The lads were emotional and paid the perfect tribute to Gary, they’ve been brilliant today. It’s just fitting that they scored 56 points and that was his age. The second half we were excellent, completed our sets and it really worked for us.”

Ukraine will take on Wales in the curtain raiser to final for the European U19s Shield.