In game one of the 2022 State of Origin series New South Wales was defeated by Queensland in a close contest that ended 16-10.

Despite the tight result an immense amount of pressure has been placed on Blues coach Brad Fittler by fans and the media to make wholesale changes to his squad for game two and the former player has obliged by giving the side a real shake-up.

One of the more surprising changes Fittler has made, albeit one that fans have been calling for since before game one, is moving Panthers hooker Apisai Koroisau from the extended squad to the starting lineup and dropping three-time series winner Damien Cook to the bench.

Former New South Wales State of Origin series captain Paul Gallen has put out an article today via the Nine’s Wide World of Sports website where he has reacted to the side his colleague has named for game two and has explained why the decision to start Koroisau is the right one.

“I’m not surprised Freddy has gone with Api Koroisau as the starting hooker, and once again it’s down to the Penrith factor,” said Gallen.

“The way the Queenslanders were able to take Damien Cook out of the game at Accor Stadium was a big influence on that result. 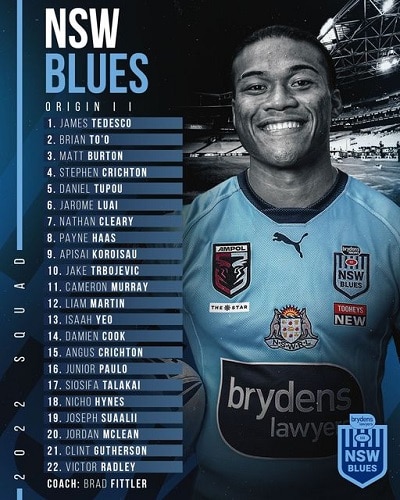 “I think the plan will be for Api to start the game, tire the Maroons forward out early on, and then Cook can come on.

“One of the reasons I think he didn’t have the impact he would have liked in Origin I was the fact he played the full 80 minutes, and with Queensland controlling the ruck, it nullified his game to an extent.

“With Api starting, Cook can hopefully come on and run amok as the Queenslanders start to get tired. That may not even be in the first half, you may not see Damien until the 50-minute mark.”

The decision to have two hookers in the 17-man lineup could be Fittler’s attempt to replicate and subdue the success Queensland has found with the Ben Hunt and Harry Grant combination that worked for them in game one.