With live sport in abeyance due to the global coronavirus lockdown, the Ghana Rugby League Federation has come up with two innovative ways to keep the fledgling sport in the nation at the forefront.

This weekend should have seen the fourth round of the country’s men’s 9-a-side tournament featuring its four domestic sides: Bulls, Panthers, Pirates and Skolars. Instead of meeting on the field, they will contest the fixtures on social media, starting at 2pm on Sunday (26 April), with fans anywhere in the world asked to ‘like’ the sides to determine the results.

Each period to vote will last 18 minutes with the winners of the respective fixtures being those that receive the most support.

Bulls player Joshua Apalbilah said: “Virtual rugby is a way of creating awareness here. In times like these it keeps the rivalries going as if it were an actual match, we have to engage our supporters – but in a different way.”

Pirates head coach Deka added: “The more rugby League goes viral, the better the coverage for RLFG. I have also suggested that there be quizzes before and after the period of the games, to whip the interest of newcomers and deepen the awareness of those playing.”

The planned monthly 9s competition saw January and February’s rounds played before lockdown with March’s being virtual. Hilaria Wuaku, RLFG head of communications noted: “We had lots of interest and participation in the March edition from players and fans of the competing clubs, supporters from across the globe and, more especially, non-rugby fans who were our major target. We aim to create an alternative for everyone as they sit at home keeping safe and to increase followers of the game here in Ghana.” 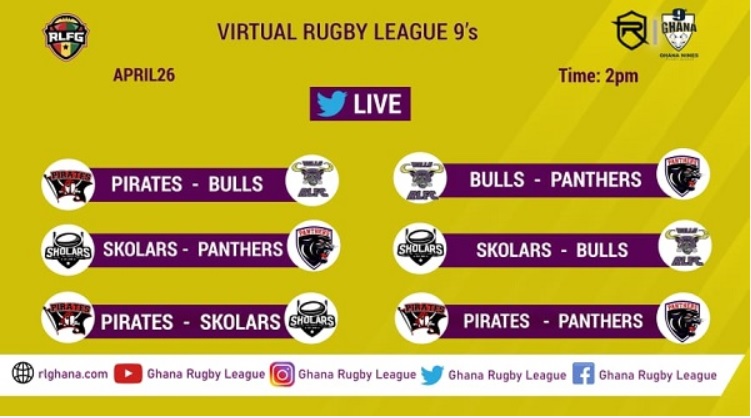 Preceding this round of matches, and as part of the Federation’s five year strategic plan, tonight (Friday) at 6pm they will broadcast an on-line lecture entitled, ‘Social media as a tool to promote rugby league in Ghana’ in partnership with sponsors, communications organisation Radical.

Radical’s founder and director, Humphrey Odjenmma Botchway, commented: “There are opportunities in uncharted territories and we believe that rugby league in Ghana can change more lives and create greater impact if social media is used to break the stereotype, push the limits and break boundaries – making the sport more lucrative, attractive and popular in the country and on the continent. We hope that through the conference, players, management and all involved will take advantage of this opportunity.”

RLFG manager, Jafaru Awudu Mustapha, noted: “In these times where there is a ban on social gatherings and sporting activities, it has become prudent to turn to other means of work and ways of doing things. We are starting to discuss the way forward after COVID -19, and on the backdrop of that is why we are organizing this lecture to equip both players and teams and anyone else who is interested to take part.”

The lecture is open to all on – https://bit.ly/2Y1qWoM