“Go back to the Tigers? Yeah, I would be [interested]”: Nathan Brown

Nathan Brown’s 2022 certainly did not go the way the prop had planned it to.

He had been a consistent part of the Parramatta Eels first-grade squad which remained the same for the first half of the season but he was eventually dropped to the club’s New South Wales Cup side and injury troubles saw Brown spend time on the sidelines.

Reports also emerged in June that the Eels had given Brown permission to find another club despite still being contracted to the club until the end of next season.

While he was unable to secure a midseason move away from Parramatta it seems the 29-year-old has now found himself a new club.

Brown recently spoke to The Daily Telegraph’s Brent Read about a potential move back to his former club the Wests Tigers.

“Go back to the Tigers? Yeah, I would be [interested],” Brown said.

Nathan Brown was shocked when told he had no future at the Eels – now the enforcer has wants a change that will shake up the #NRL.

“They have a couple of good signings with Sheens there, Benji and Farah.

“I think they are going to be on the up.

He then opened up about the Eels telling him that his services would no longer be needed at the club.

“It was just out of the blue,” stated Brown.

“When it hit me, I didn’t really expect it.

“If I didn’t care it wouldn’t have affected me but it did take its toll. 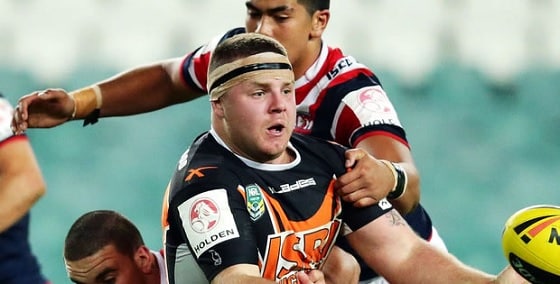 “I had some days when it was tough.

“You can only control what you can control.”

There is currently no word on if the Tigers will be looking to sign Brown immediately or wait until November to negotiate a contract for 2024 but based on Parramatta’s eagerness to let him go it is likely the deal would be for 2023.

Apisai Koroisau and Isaiah Papali’i are set to join the Tigers next year and the signing of Brown would certainly solidify their forward pack.

David Klemmer is another player that Tim Sheens may look to sign as rumours that the forward is unhappy at the Newcastle Knights have failed to subside, although at some point soon the Tigers will need to start looking at strengthening their backline.