Greece and Norway chasing a river of dreams in London

When Greece and Norway run out onto New River Stadium in London on May 18 both teams on the verge of creating history and securing a first ever World Cup berth for their respective countries.

The Greece team will arrive in England via a narrow 28-26 victory against the Ukraine followed up by a good 60-4 win against Malta in Athens.

Norway went into their last match against Germany as underdogs after earlier losing 12-20 to the Czech Republic. In a thrilling encounter, the Vikings managed to secure a 40-22 win and proceed to the next stage on points differential.

The nation that comes out in top in London will progress to final 2021 World Cup qualifying rounds with Scotland and Russia. Two teams from the group will qualify. A win in one game will most likely see either the Greeks or Norwegians realise their World Cup dream.

Everything Rugby League spoke to both national coaches for their thoughts on the important encounter. Norway and Greece have never played against each other before.

Greece coach Jim Pizanias is not expecting an easy ride to the next stage.

“I have watched some videos of their (Norway) game against the Czech Republic and was impressed with their physicality and movement of the footy. They have some big forwards and speedy outside backs with a good halfback who organises their attack.

“The game will be physical and the team that completes well and manages the game will win, said Pizanias who is currently Assistant Coach at the Newtown Jets.

Norway national coach Dave Hunter agrees the game will be a physical encounter and is aware of the attacking ability of the blue and whites.

“They are going to be physical and we’ll have to match them in that department. We’ve seen their games against Ukraine and Malta so we know what they are capable of.

“Greece are a team with plenty of points in them so we’ll have to be at our best on defence, said Hunter who played in four internationals for Norway.

Both nations will be relying heavily on domestic players with a limit of four heritage team members applying to this game.

Greece has a pool of approximately 100 domestic players across five different clubs to choose from while Norway has eight teams in their competition.

While Greece will most likely select the maximum of four heritage players in their 17 man game day squad, Norway will run with just two due to availability.

“The reality is that we don’t have too many Norwegian eligible players playing outside of Norway, Hunter explained.

“Win, lose or draw against Greece our main focus has always been to grow Rugby League in Norway, and it’s the domestic players who are driving that growth.

Pizanias who was once on the coaching staff at the Newcastle Knights is confident that the 13 domestic players that take the field for Greece will do their nation proud.

“I have all the faith in the world in our domestic players that have been picked in the squad. I know they all have been working hard on the games and can’t wait to get Athens and bring them altogether and start our preparations.

“Each one of the boys will have a role to play in the game and I am confident of them all playing well.” 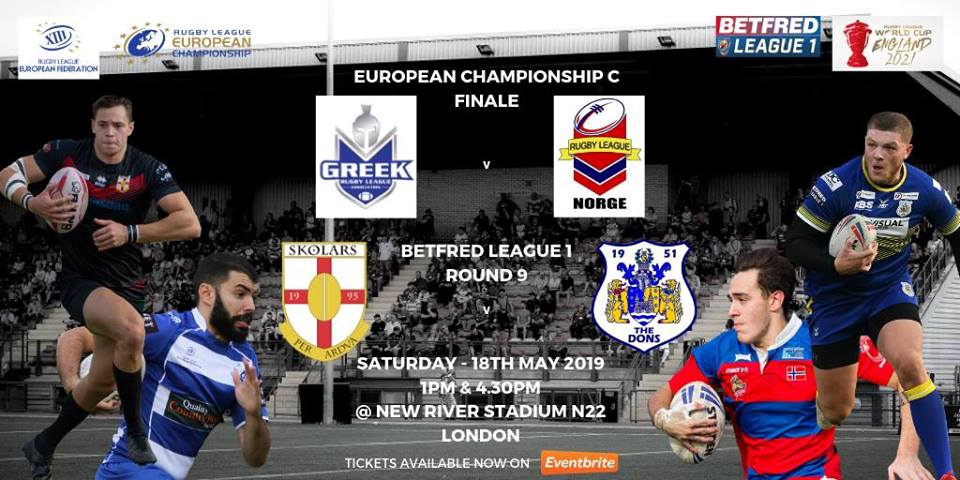 World Cup inclusion has the potential to be a massive boost for the sport in Greece or Norway. An added bonus that is not lost on the respective coaches.

“The exposure would be great and hopefully it would help us get government recognition. But for now we’re just focusing on the game against Greece, Hunter said.

Pizanias is excited about the opportunity to achieve qualification.

“This game will lay the platform for Greece to be able to qualify for the 2021 Rugby League World Cup. I think all the Greek domestic players will have a goal and will work hard to become better players.

“It will hopefully get some publicity in Greece which will allow the sport to keep growing so we can unearth some future stars.”

Greece will play Norway at New River Stadium in London at 1:15 pm on Saturday 18 May. The international match will be followed by League One match London Skolars vs Doncaster Dons at 4:30 pm.