The first official match to be played in Greece since rugby league gained formal recognition as a separate entity takes place today, when their women face Serbia in game two of the inaugural Euro B women’s championship, at the Gorytsa Stadium, Aspropygos, Athens (kick off 3pm local time).

The Greeks, who can tie up the southern region group title if they win having beaten Turkey 8-4 in Istanbul last weekend, have named an unchanged squad.

“The mood at training has been good, however, we know Serbia will come to Athens ready to play,” said head coach Stuart McLennan. “We will need to play with plenty of energy and commitment. Hopefully being in front of our home crowd for the first time will inspire us, we feel confident but at the same time remain very focused. We want our hard work to pay off.”

Serbia has selected seven new caps in their squad and include sisters Ljiljana and Nika Bajic. Captain, Jelena Stojiljkovic noted: “I am excited because after three years we have an international match. I can’t wait to play together after so long, we’ve been working hard and we have high expectations.”

Marija Maslakovic, SRL director of women’s rugby league development, added: “The Serbian team that is playing this year is a combination of young and experienced players. We have worked hard and we hope that it will be shown on the field. We have a big expectation for this team and we are aiming for the best. There is no greater honor for us than to represent our country in this competition because rugby is not only a game, it’s a way of life.” 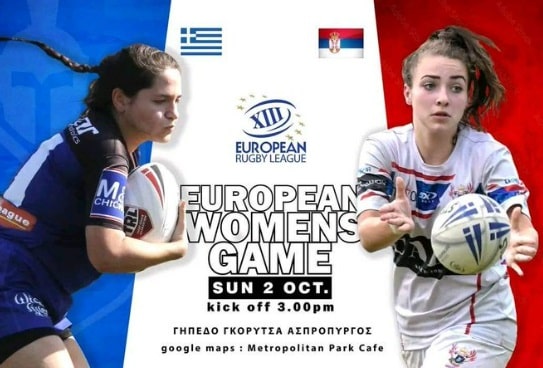 The match will be live-streamed on www.facebook.com/rlgreece