In 2003, the idea of a Greek National Rugby Rugby League team began to become a reality as a side was put together in Sydney, partaking in matches against other emerging nations and building their presence in the International arena.

The next big leap in Greece’s Rugby League journey came in 2006 when the first-ever game of Rugby League was played in the nation.

In a game officially sanctioned by the Rugby League European Federation, Greece defeated Serbia 44-28 on the outskirts of Athens at Glyka Nera Stadium.

Years of trials and tribulations then ensued as Rugby League in Greece had to fight for its survival before finally, in 2017, The Greek Rugby League Association was officially registered and was governed by its six founding board members George Stilianos, Aris Dardamanis, Michalis Chatziioannou, Eleni Papamanoli, Terry Liberopoulos and Steve Georgallis.

The formation of The Greek Rugby League Association would also result in the reformation of the Greek national team after a long hiatus.

Just over two years later Greece would achieve the unthinkable by qualifying for the 2021 Rugby League World Cup when they beat Serbia 82-6 in Belgrade to attain their spot in Rugby League’s greatest tournament.

It was to this day the biggest moment in the history of Greek Rugby League but the blue and whites will be looking to surpass that in the Rugby League World Cup at the end of this year.

However, they have been dealt quite a tough hand by being drawn in group a alongside hosts England, Samoa and France, who will be hosting the 2025 World Cup.

One player who is expected to represent Greece against these nations is Billy Tsikrikas who recently made his NRL debut for the Canterbury Bankstown Bulldogs when they took on the Brisbane Broncos at Suncorp Stadium on Friday night,

Unfortunately for Tsikrikas, his debut would result in a 34-14 loss. 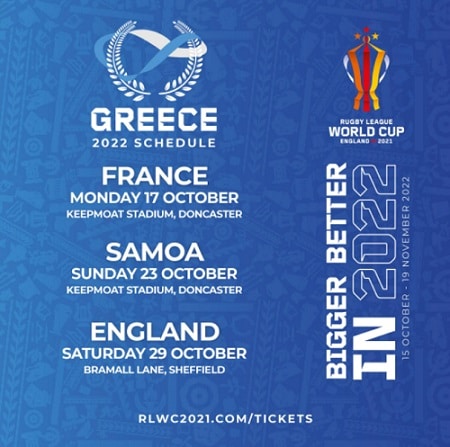 “We knuckled down to make the World Cup, which is a big step for Greece, and we went there with Steve [Georgallis],” Magoulias said.

“The game is quite raw over there and we did a lot of development work and coaching sessions.

“There are only 16 teams in the World Cup and we are probably going to be ranked down the bottom but we will obviously try to compete and get into the play-off stage.”

Greece will make their Rugby League World Cup debut against France on the 17th of October in Doncaster.