NRLW forward Samantha Economos turned out for Goulburn against Yass in the Grand Final of the Katrina Fanning Shield in 2018.

Back then, there was no talk of the local Raiders NRL club fielding a women’s team in a national competition.

To play at the level befitting her goals and ability, Economos donned the jerseys of NZ Warriors and Sydney Roosters in the NRLW and St Marys and Cronulla Sharks in the Harvey Norman NSW premiership. Along the way she has racked up countless hours in the car travelling thousands of kilometres attending training and games added to her work commitments as a school teacher.

It would be an understatement to say Economos, who still lives in the Canberra region, was happy to see the Raiders announced as one of four additional teams announced to contest the NRLW competition in 2023.

“It is an extremely exciting opportunity for the young girls growing up and playing in the Canberra region and surrounds, and something that is definitely necessary for the game to continue to grow and develop in that region. It provides a pathway for girls and something for them to strive to reach and play for their home region,” said Economos who has previously represented NSW Country and the PM’s XIII.

“I feel next year the Raiders need to put a team in the Harvey Norman Women’s competition in Sydney to provide those top-level girls with the opportunity and experience they will need to make that next step up to the NRLW and give them further opportunity to be seen by coaches and selectors in a high-level competition. 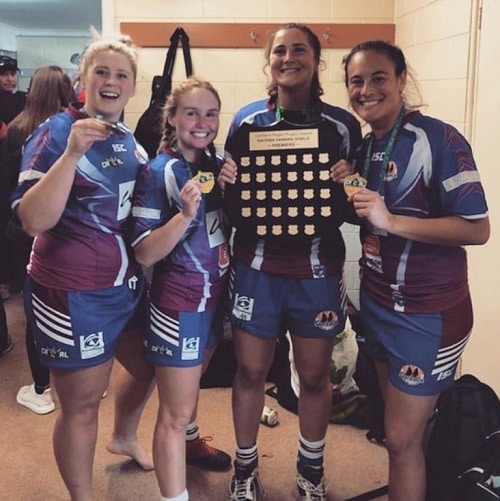 “It is awesome for the sport in Canberra as well and will hopefully pull girls across from other sports, providing even more depth in the sport of rugby league.”

Economos, whose NRLW season was interrupted by illness and an eye injury, has re signed with premiers the Roosters for the rest of 2022 but she admits to holding an ambition to play in the lime green.

“I would love to play for the area in which I played my first rugby league game, and I also grew up playing all of my hockey in the Canberra region and have played for the Canberra Strikers (now Canberra Chill) in the Australian Hockey League since I was 19.

“It is a place where I have family and friends and owe a lot of my sporting success to that region. Saying that, I am definitely just focused on the season ahead. Firstly, with the Cronulla Sharks in the Harvey Norman competition, where I have just started playing again since shattering my eye socket in the postponed 2021 NRLW.

“After the Harvey Norman competition I will then be focusing on starting pre-season with the Sydney Roosters for the NRLW that will be played later on this year. Hopefully I have better luck with illness and injury than I did this year.”