“I better not give TPJ too much cheek”: Phil Gould

Tevita Pangai Jr recently revealed his self-imposed stipulation that he put in place to try and get in better shape before the 2023 NRL season.

The forward told Channel Nine that if he didn’t weigh in at less than 110 kg by the time next season begins then he has given Bulldogs coach Cameron Ciraldo permission to release him.

A motivating factor for Pangai Jr was a meeting he had with Bulldogs general manager Phil “Gus” Gould that the 26-year-old spoke about during his interview with Nine.

“He [Gould] just told me I need to have a better attitude coming into training and he‘s not going to accept the stuff I did last year, so it’s a good wake-up call,” said Pangai Jr.

Pangai Jr’s pursuit of fitness would have been greatly assisted by his preparation for his second professional boxing match against Jeremiah Tupai-ui.

In the second round, Pangai Jr dropped Tupai-ui with a left jab and won the bout by knockout. 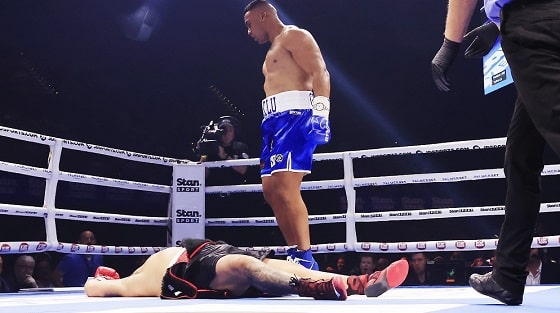 Gould seems to already be impressed by the Tongan International as he tweeted about Pangai Jr’s victory following the fight.

“I better not give TPJ too much cheek!!”

The former South Newcastle Lion’s win was made all the more worth it by the fact that he passed up an opportunity to represent Tonga at the Rugby League World Cup in England.

After a strong 2021 TPJ joined the Bulldogs last season with a lot of hype surrounding his arrival.

Unfortunately, he did not consistently line up to the expectations of most and was heavily criticised.

Hopefully, last night’s victory has set the foundation for what will be a great 2023 for Pangai Jr as the Bulldogs bolster their pack with the signings of Reed Mahoney from the Parramatta Eels and Viliame Kikau from back-to-back premiers the Penrith Panthers.

The recent retirement of Josh Jackson has left a big hole in the club’s hierarchy though as the Bulldogs are currently without a captain for next season.

A few names have been suggested as candidates for the role but nobody has received more backing thus far than winger Josh Addo-Carr.