“I wish I did play for Ireland in that World Cup”: Keary

Sydney Roosters star Luke Keary is set to provide a massive boost to Ireland at the upcoming World Cup after revealing he was committed to the Wolfhounds.

Keary, who qualifies for Ireland through his father, regrets missing the opportunity to represent his family heritage at the 2017 World Cup and has told Wolfhounds coach Ged Corcoran that he is keen to play for the Celtic nation at the end of the NRL season.

“I stuck my hand up for them in 2017, it didn’t eventuate because I had a few things at the back end of the year so we will just see how the next few weeks go, but I have told the people I need to tell what my intentions are,” he said.

“I wish I did play for Ireland in that World Cup, I just didn’t get to. I have always had a connection there since I was a kid.

“Dad’s family are still over there. He has gone to visit, I haven’t been over there but you just feel proud. When you talked about it as a kid you always felt proud. It makes me feel good thinking about it.”

The 30-year-old posed alongside an Irish flag with Rugby League Ireland sponsor and official Rory O’Hara after the Roosters’ July 28 match against Manly.

Keary is likely to play in the halves with Leeds playmaker Richie Myler, while a number of other NRL stars, including Manly Sea Eagles centre Morgan Harper and Gold Coast Titans prop Jaimin Jolliffe, have been linked to Ireland. 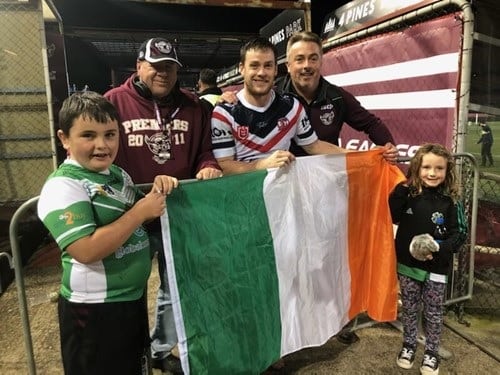 “I know Richie Myler is a pretty experienced five-eighth but I haven’t thought about it in too much detail,” Keary said. There are a lot of players going for England selection too, that might miss out.”

A three times premiership winner with South Sydney (2014) and the Roosters (2018, 2019), Keary has played two Tests for Australia in 2018 and also made one State of Origin appearance for NSW.

Jarome Luai’s decision to play for Samoa has left Australia without an obvious back up five-eighth should Cameron Munster be unavailable but Keary said he had made the call to play for Ireland at the start of the season.

Ireland was considered hard done by to miss the quarter-finals at the 2017 World Cup after beating Wales and Italy, whose side included Roosters and Blues captain James Tedesco, but losing 14-6 to Papua New Guinea in Port Moresby.

“They were good, they won two games and they just missed the finals. The probably should have beaten PNG,” Keary said. “I am keen to play and if I do get the chance I will be proud to represent Ireland.

“I spoke to them at the start of the year. We have got Jamaica, Lebanon and the Kiwis. If we can get through those first two games, I think we will be right.

“It is going to be a great World Cup, there are so many great NRL players who are putting their hands up to play for their nations of birth or heritage or where their parents come from. I think it is great for our game.”