“If you’re going to be racist, just say it to yourself”: Latrell Mitchell

One of the biggest stories of 2022 has been the growth and development of Latrell Mitchell as not only a player but a human being.

After suffering an injury early this season the 25-year-old took the opportunity to not only aim to return to match fitness but to improve but to become better than he ever has been.

To do this he travelled to America to rehab his injured hamstring with some of the world’s best doctors.

While he was out injured his club the South Sydney Rabbitohs were in the top eight but struggling.

Upon his return Mitchell turned the Bunnies season around as they comfortably finished in the top eight and made it to the preliminary final before being eliminated by eventual premiers the Penrith Panthers.

Mitchell’s willingness to go the extra mile to improve his physical health has led to him putting energy into improving his mental health.

The fullback revealed to The Daily Telegraph that he now keeps a journal which he contributes to daily.

He has found this to be a cathartic experience where he has been able to process many issues in his life including racism which he opened up about in his interview with The Telegraph’s Brent Read.

“It’s definitely on the right track.

“But obviously there’s a lot of fellas we won’t be able to change their minds.

“I just want to change the next generation to make sure they’re culturally sensitive.

“That’s all I want and if you’re going to be racist, just say it to yourself.

“There’s no need to say it out loud.”

Mitchell also revealed that he fully intends to remain a Rabbitoh for the long term.

“I still have 12 months and I hope Souths fans aren’t panicking too much,” Mitchell said. 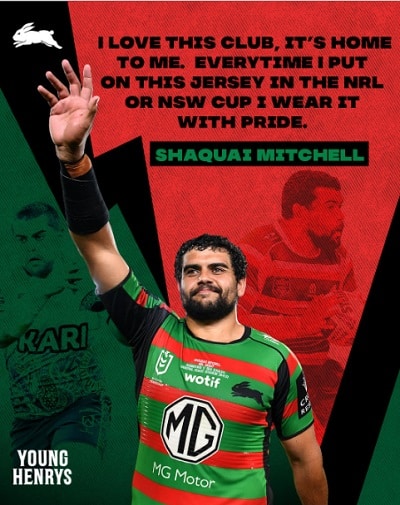 “I am not panicking. I am definitely keen to stay where I am. We will talk and negotiate.

“My older brother has just signed for two years which is well deserved.”

Bunnies fans across the globe will be breathing a sigh of relief after reading these comments as Mitchell’s contract is up at the end of next season.