In and Away with Nick Mougios

If you haven’t seen the 79th minute Nick Mougios try for Greece the commentators are calling the best so far in this Rugby League World Cup yet, do yourself a rugby league favour. You won’t be disappointed.

“They (France) were really compressed and Billy (Magoulias) sort of looked at me, I looked at him, we sort of knew what was going on,” Mougios told Everything Rugby League.

While Magoulias is renowned for his last minute game changing chip kicks after he executed them successfully to win finals matches for Newtown 2019, it was the dancing feet of Mougios that eventually had the Doncaster crowd in raptures.

“I stood really wide and they were really compressed and he just chipped it over. I had nothing planned but I looked up and saw no one inside me. I was planning to kick it originally, but there was no one there. So I think my instinct kicked into step the fullback with an in and away.

The ‘in and away’ move was perfectly executed prompting one punter on social media to remark that Mougios ‘sent the French fullback to the gyros stand.’

It appears backyard footy can take the credit for the Mougios moves.

“I guess paying a lot of backyard footy and touch footy at training you just integrate it into your game without really thinking. It was more of an instinct thing for me rather than pre planned,” said Mougios who rejected soccer after one training session for rugby league, starting with the South Eastern Seagulls before playing most of his junior career with Coogee Wombats.

The 23 year old outside back, who has played the past couple of seasons for South Sydney in NSW Cup has ambitions to play NRL and will look to sort out his future career once he returns from the World Cup.

In the meantime he is proud to be representing Greece, a country he decided to represent after his father whose family came from Corinthos and Patras passed away.

“It is a huge honor to play for my father’s heritage. He actually passed away a couple years ago, and I decided to play for Greece, through his heritage. It means a lot to our family and I guess all the boys’ families. It’s a big culturally driven sort of country and community so it means a lot when you put on a jersey. You are playing for not only you but the country and your family.

“My mum has been ringing every so often. She is very proud of me. She was crying after the try she said.”

The physiotherapy student has a deep respect for the Greece coaching staff and in particular the experienced Steve Georgallis.

“He’s a wealth of knowledge. What he’s taken from the NRL is something that all of us have not taken for granted. We really appreciate all the knowledge and experience and it’s trickled down especially to the Greek (domestic) boys. I’ve also learned a lot now. They (domestic players) have been asking us questions too. We’ve not hesitated to help them wherever we can. ‘Georgie’ has been exceptional as well as Jim (Pizanias) and the other coaching staff helping us.”

Mougios acknowledges the tough draw for Greece with Samoa and England to come but is not focussing too much on his opposition. 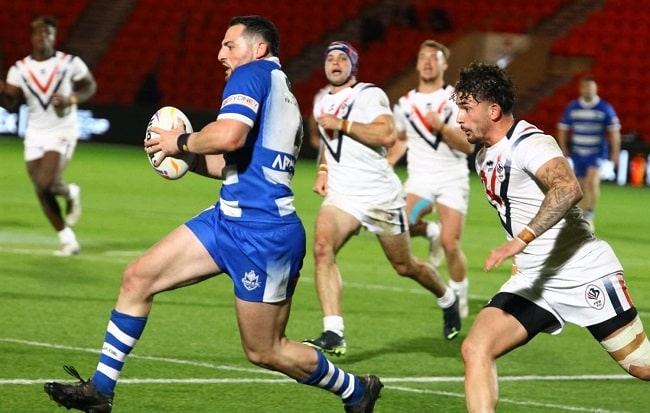 “They’re both really tough opponents as the French were. We just have to play our game and not really think about what’s in front of us. If we focus on what we have to do, I guess the scoreline doesn’t really matter. But as long as we play our best and execute what Georgie has given to us through training and this whole camp that’s all we can ask for.”