Golden Cap recipients Cameron Smith, James Graham and Ruben Wiki will help select the winner of the 2022 Men’s IRL Golden Boot to be awarded to the international player of the year ahead of the upcoming World Cup final at Old Trafford.

Another Golden Cap recipient, Adrian Morley, who – along with Smith (Australia), Graham (England/Great Britain) and Wiki (New Zealand) – is among nine players to have played 50 or more Tests, will present the Men’s Golden Boot to the winner.

The IRL Women’s and Wheelchair Golden Boot trophies will also be presented at The Midland Hotel in Manchester on Tuesday, November 15.

Long serving RFL executive Karen Moorhouse, who is on the board of RLWC2021, and Wheelchair Rugby League pioneer, Malcolm Kielty, MBE, will join Morley in presenting the awards.

The Golden Boot is one of the longest running and most prestigious individual awards in the game, and is awarded to the best international player in the world each year – although there has been a two year hiatus due to COVID.

A panel of leading journalists and commentators from Australia, England and New Zealand has been considering the best players throughout the World Cup and a Men’s Golden Boot long list was finalised after the pool matches. 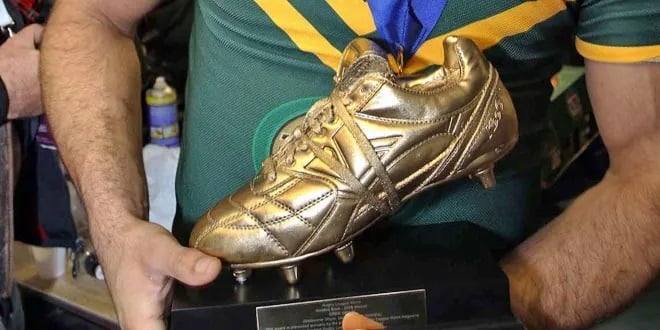 Schoenmaker has been recognised for his performances for the Netherlands in 2020 and 2021 when few other nations played international fixtures.

Smith, Graham and Wiki, who are all former Test captains, will help select the Men’s Golden Boot winner after this weekend’s semi-finals between Australia and New Zealand at Elland Road, Leeds and England and Samoa at Emirates Stadium, London.