Italian players are honouring one of their nation’s pioneers Tiziano Franchini at the World Cup by wearing specially designed jerseys with his name above the crest during their captain’s run.

The team, which is captained by Parramatta Eels forward Nathan Brown, were presented with the jerseys and told of Franchini’s legacy ahead of their opening 28-4 win against Scotland last weekend.

The long serving former Italian player and administrator passed away in March, aged 44. He was one of the founders of the Rugby League European Federation in 2003.

Federazione Italiana Rugby League president Orazio D’arro said having his name on the captain’s runs jerseys was a fitting tribute to Franchini.

“I was lucky enough to play with Tiziano in 1995 through until early 2000 and he was a true character of the game who gave his time to develop rugby league, including development stints in Greece, Spain, Germany and Italy,” he said.

“RLWC2021 Italia players were presented their captain’s run jersey and told of Tiziano’s love of rugby league and his passion to develop the game in Italy, along with his love of the South Sydney Rabbitohs.

“We wanted to pay tribute to Tiziano at the World Cup and RLWC2021 approved us to wear captain’s run jerseys with RIP Tiziano, his birth date and the date of his passing above the crest.”

After beating Scotland in their opening match, Italy are eyeing a quarter-final berth if they can overcome Fiji this weekend at Newcastle’s Kingston Park and the team has been bolstered by the inclusion of Panthers NSW Cup captain Alec Susino. 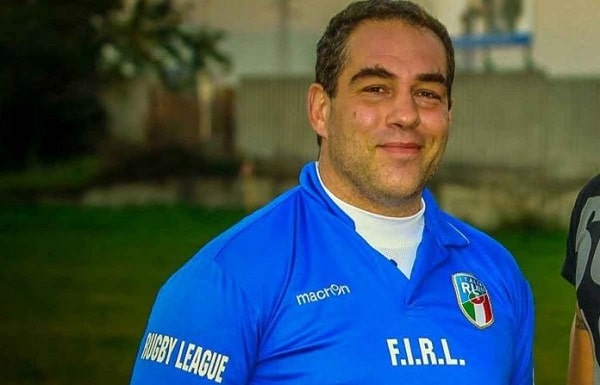 Italy coach Leo Epifania said there had been a strong emphasis on ensuring the players were aware of what they were playing for at the World Cup.

“You are playing for a jersey so you’ve got to know what it means,” said Epifania, who is Wests Magpies general manager.

“We don’t like just handing jerseys out for the sake of it. This is for the whole journey that we have all been on.”

Italy’s next match is against Australia in Warrington and with the majority of the squad being drawn from the NRL, NSW and Queensland Cup competitions they are looking forward to playing the Kangaroos.

“We just want to show plenty of fight, a willingness to not lay down and keep coming back for 80 minutes,” Epifania said.

“We’ve got to play to win and however it ends up, it ends up. I really emphasised that we had to focus on the Scotland game because everyone had their head around playing Australia.

“It is a great thing, Italy hasn’t played against Australia since the 1960s after a Kangaroo tour, when they stopped on the way back, but we need to perform in the other games first.

“We want to walk off with our heads held high because we are proud, and we done the right thing by our heritage.”