The most prolific try scorer in the NRL, Alex Johnston, is set to spearhead Papua New Guinea’s Pacific Test campaign.

After being named in a 19-man Kumuls squad to play Fiji at Campbelltown Sports Stadium on June 25, Johnston was chosen at fullback and is one of four NRL stars in the squad, along with Sydney Roosters playmaker Lachlan Lam, Melbourne Storm centre Justin Olam and Brisbane Broncos veteran David Mead.

The majority of the squad for the first Test under the coaching of the recently appointed Stanley Tepend play in the Queensland Cup, including six players from the PNG Hunters.

With 14 tries in 13 appearances for the South Sydney Rabbitohs this season, Johnston is on track to be the NRL’s leading tryscorer for the third consecutive year.

Among his achievements are:

*Becoming the highest try scorer in South Sydney history after scoring a hat-trick for the 1908 foundation club against Wests
Tigers two weeks ago to better Nathan Merritt’s tally of 146 tries, and;

*Twice equalling the record for the most tries in an NRL match when he crossed five times in games in 2017 and 2020.

At just 27-years-of-age and with a strike rate of 1.21 tries per match, Johnston is on track to pass Ken Irvine’s record of 212 tries as the greatest tryscorer in Australian premiership history.

He qualifies for the Kumuls through a PNG-born grandmother and made his Test debut in 2019.

Canterbury Bulldogs playmaker Bailey Biondi-Odo was unavailable for personal reasons but is expected to make his PNG debut during the end-of-season World Cup in England.

St George Illawarra Dragons forward Jack de Belin and former Kumuls captain James Segayaro, who has recently revived his career with Manly’s NSWRL feeder team, were not selected but may still play for PNG at the World Cup.

Tepend, who replaces Michael Marum as coach after previously serving as his assistant, said he was excited by the challenges ahead and looking forward to getting into camp with the players on Tuesday.

“There are six Hunters players who have been named, even though we haven’t been doing well but I feel that the players named have earned their positions,” Tepend said. 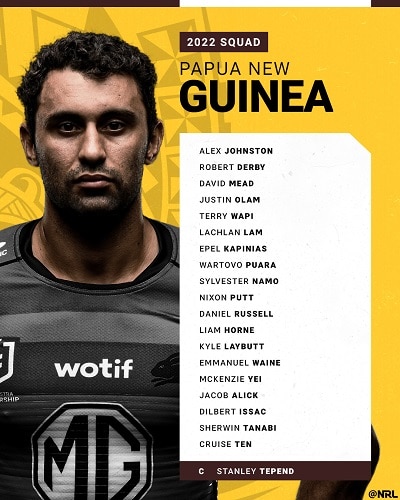 “Once we get into camp, we will have a light run on Tuesday, Wednesday is our big day, we’ll have two sessions, Thursday we’ll have a day off, then on Friday we have the captains run and Saturday is game day.”

PNGRFL CEO Stanley Hondina said: “The last mid-year Test the PNG Kumuls were involved in was back in 2019. After that we have had a quiet period attributed to COVID-19 and all the other challenges, but we are delighted that this event is coming up”.