Keary, who has played for Australia and qualifies for Ireland through his father, is expected to partner former England halfback Richie Myler in a formidable halves pairing for the Wolfhounds, who are in the same pool as New Zealand, Lebanon and Jamaica.

There are nine players who have been previously capped with Ireland, with fifteen then eligible to make their first senior appearances for the Wolfhounds during the World Cup. 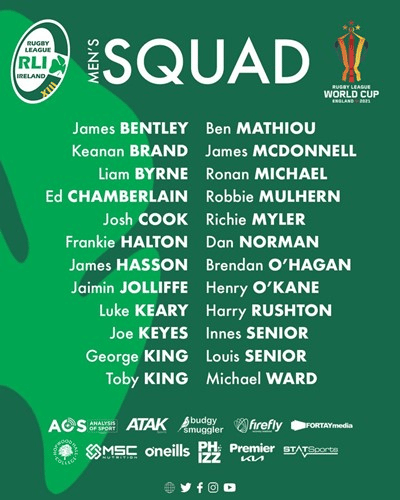 Halifax Panthers’ Joe Keyes is one of the seven Championship players in Corcoran’s squad and comes into the tournament in outstanding form which was reflected by being named on the shortlist for the competition’s Player of the Year.

The Halifax half has already been capped eight times as an Irish international.

Michael, who moved to Canberra in 2020 to play Jersey Flegg but did not see any action due to COVID ending the season, became the first Irish-born player to feature in a Super League match since Brian Carney when he made his debut for Wigan in 2020.

Ireland begin their World Cup campaign against Jamaica on October 16 before facing Lebanon at Leigh Sports Village on October 23 and New Zealand at Headlingley on October 28.