In a repeat of the 2019 Nigeria Rugby League Grand Final, the result was reversed as Lagos Haven picked up their first title, defeating Kano Lions 24-16, at Kings College Secondary School field.

Scrum half Joshua Rankin scored two tries and Alex Monday 12 points with a try and four goals for Haven, whose head coach Samson Okeowo said: “I am happy we won this title. We have trained so hard and this is the time for the boys to celebrate.”

Julius Godwin posted two tries for the Lions, who led narrowly at the break, Sam Prince claiming one along with a goal. Their captain, Ibrahim Nuhu commented: “I cannot fault the spirit of our boys. As a team we are not afraid to lose, the game was exciting and we look forward to meeting them next season.” 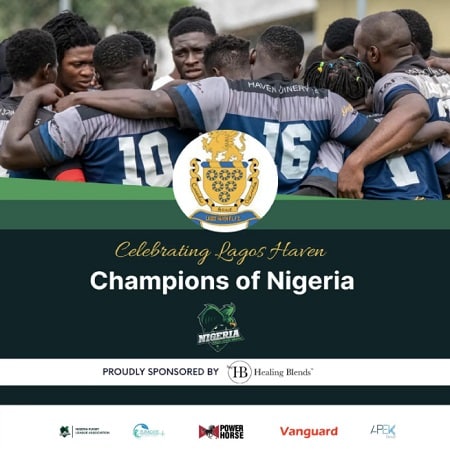 A number of the players from both sides are expected to be in national head coach Joe Mbu’s squad for the 2022 Middle East Africa championship in Ghana at the end of the month. Nigeria are the defending champions and the games this time form part of the qualification process for the 2025 Rugby League World Cup in France.

Ibrahim, expected to be among their number, added: ‘’We are going to Ghana to win and we have to bring ourselves together as players so that we get to know ourselves better. Getting to a World Cup would be a massive achievement for the nation.’’