French coach Laurent Frayssinous has predicted his team can defy the odds and do the country proud after the RLWC2025 hosts announced their squad for the upcoming World Cup in England.

France meet Greece, who were the first nation to name a squad, in their opening World Cup match at Doncaster on October 17.

Les Tricolores then have matches against hosts England at Bolton on October 22 and Pacific powerhouse Toa Samoa at Doncaster on October 30 and Frayssinous admits it is going to be a tough assignment for his team.

However, with 21 of his 24-man squad drawn from the Super League, including former Tonga playmaker Samisoni Langi, he believes France can qualify for the quarter-finals.

“We know the quality of the opponents that await us, with Greece and their NRL players, England [being 2017 World Cup runners-up] and Samoa made up of several players who played the State of Origin,” Frayssinous said.

“But I am confident in our team to defy the odds and make all French people proud. The 24 players all know the high level and are ready, with all the staff, to take up the challenge.”

St Helens playmaker Theo Fages, who captained France at the 2017 World Cup, has been ruled out, along with Julian Bousquet, Romain Navarette and Lucas Albert.

However, Langi will reunite with his former Sydney Roosters coach Trent Robinson, who is the FFR XIII director of rugby, after qualifying on eligibility grounds as the Catalans centre has resided in France for five years. 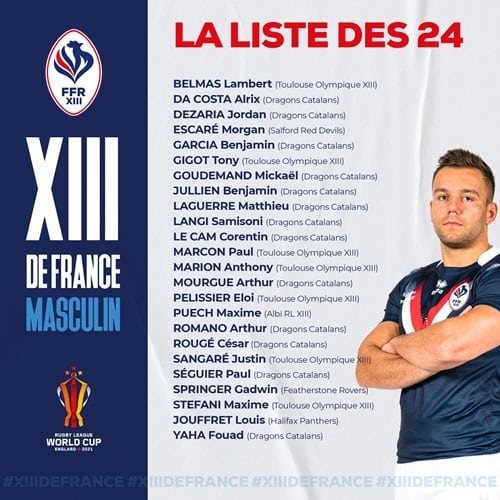 Langi, who played under Robinson at the Roosters in 2013 and 2014, represented Tonga at the 2013 World Cup but hasn’t played for the Pacific nation since the 2016 Pacific Test against Samoa.

Under IRL eligibility rules, a player can only swap from one Tier Two nation to another Tier Two nation for which he or she qualifies once within a four year period, which commences from the date of any previous election.

Catalans captain Benjamin Garcia, who had stints with the Brisbane Broncos and Penrith Panthers in his earlier years, will lead a French team brimming with young home grown talent.

“I am delighted with the quality of the group which will participate at the World Cup and like any coach, complicated choices had to be made,” Frayssinous said.

“We had to [deal with the loss] of Julian Bousquet, Romain Navarette and Théo Fages due to injuries, like Lucas Albert.

“Théo has accumulated injuries for almost 15 months, adding to that two concussions during the [past] two months, which medically does not allow him to be fit for competition.

“We will surely miss their experience but we will compensate with the passion, energy and the [enthusiasm] of our young players, [guided] by our leaders and our captain Benjamin Garcia, who have over the seasons, acquired this experience of high-level matches.”

“Young Justin is coming for my spot”: Joe Ofahengaue