When Greek internationals Robert Tuliatu and Adam Vrahnos found a free weekend from their RFL Championship commitments with the London Broncos they immediately made plans to explore Albania.

Always alert to development opportunities within the region, Greece Rugby League Association President George Stilianos advised the two travellers to put some training gear in the backpack and get in touch with Albania Rugby League President Arnaldo Telo.

From there a session was organised with the Tirana club in Albania’s capital, adding to the many instances of cooperation amongst the international rugby league community.

There has been a history of good relations between the neighbouring associations that saw the first Balkan Super League match played in Albania between Tirana and Attica Rhinos. Tirana were also set to join the Greek domestic competition in 2020 before the global pandemic scuttled any plans.

“Adam and I actually planned to visit Albania for a small getaway. But then I spoke to George and he suggested that, if we were free, we should reach out to the boys in Tirana and see if they were interested in a coaching session, Tuliatu told Everything Rugby League.

“I had heard amazing things about these boys’ commitment and love for rugby league from some of my friends at Attica Rhinos. So, Adam and I ensured we would have the time to run a session and it was one of my favourite experiences of the year.” 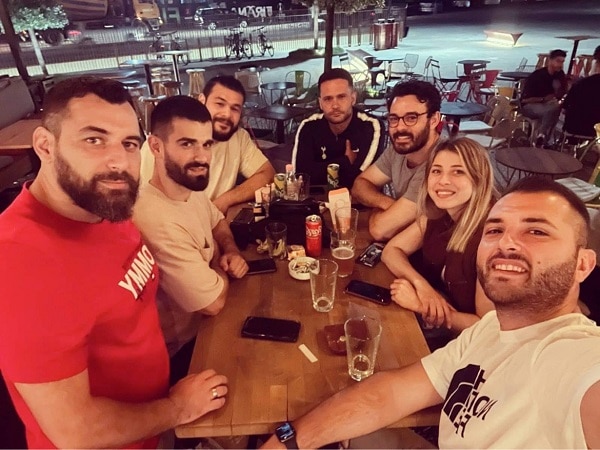 Tuliatu and Vrahnos have both been involved with assisting the development of Greek domestic players so they have a good understanding of what it means for local players.

“The boys were instantly accommodating and made us feel at home. I was very surprised at the knowledge the boys had of the English and Australian professional competitions and had even watched London Broncos fixtures.

“I was also very impressed with the boys core skills. Adam and I traded comments fairly quickly concerning the level they were at. It meant that we did not need to start from too basic a level, and we tailored the session to give the boys tips about enhancing their knowledge.

“After the session we gathered for a drink and traded stories about our rugby league and life experiences. The Tirana boys quizzed us about playing rugby league in the UK and Australia, and we quizzed them for their exclusive insider knowledge of Albania’s best travel destinations. We quickly forgot that we had only met a few hours prior, and it felt more like a reunion of old friends.”

“From the moment I announced the training to the team all of them were very excited, but being that it was not a scheduled training the majority of the players were out to the seaside for the weekend,” Telo explained.

“These two amazing lads helped us to understand what it means to play at a higher level and the approach they have toward the training. (We learned) some very interesting exercises that we are keeping and are using now for our training sessions.”

“From the human side, being able to listen to them speak about their rugby league experiences, their daily routine training and the upcoming World Cup, it makes us understand what we can accomplish as a nation and as individuals in our rugby league journey.”

The Greek internationals, both qualified lawyers, urged other professional players to spend some time out from holidays to help with development of rugby league in countries such as Albania.

“Firstly, Albania is a beautiful country and if you get the opportunity, you should definitely pay it a visit. Secondly, if you do choose to visit, send a message to their President Arnaldo Telo and get down to Tirana. You will not only witness a unique Balkan passion for rugby league, but you will be reminded of the lengths and sacrifices some people make to enjoy the game. It will be a rewarding and humbling experience,” Tuluatu promised.