Lacoste has been a driving force behind the resurgence of rugby league in France since his election as FFR13 president in December 2020.

He was elected as one of three European Rugby League nominated directors on the IRL Board last October.

A true internationalist, Lacoste played a key role in ensuring France hosts the 2025 World Cup – a move that will see the tournament founded by Paul Barrière return to its 1954 birthplace.

IRL chair Troy Grant, who worked closely with Lacoste on the France2025 bid, welcomed his election as deputy chair at the organisation’s 2022 AGM in Newcastle ahead of the opening World Cup match at St James Park.

“I am enormously pleased to have Luc by my side as we take international rugby league forward,” Grant said. 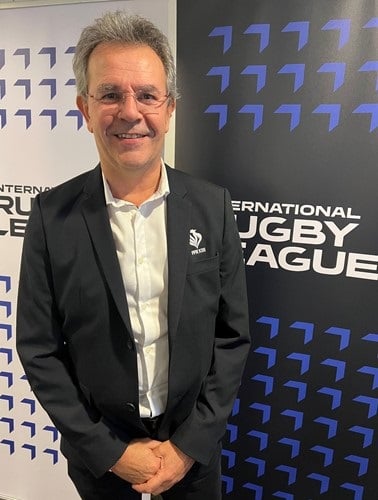 “Luc has already shown his great passion for the game through the work he has done in France, and with what he is doing for the World Cup in 2025.

“He brings enormous experience, intellect and a critical mind to the role and I am proud to work alongside my friend, Luc Lacoste.”

A fluent English speaker, who was educated and has lived in both London and Paris, among other places, Lacoste challenged Grant to learn French.

“One condition of Luc’s appointment was that I have to learn French, but I am linguistically challenged so I will just try my best,” Grant joked.