Recent signing Kelepi Tanginoa could make his debut for Trinity with both Matty Ashurst and Anthony England returning in place of Jordan Crowther and Chris Annakin. Catalans, meanwhile, welcome back Matty Smith and Lambert Belmas, but the influential trio Michael McIlorum, Greg Bird and Sam Tomkins are absent.

With Wakefield in sixth and Catalans in third and only two points separating both sides, this fixture is likely to be a cracker. Trinity, on the back of a 42-34 drubbing away at London, will want to improve considerably on the big stage whilst the Dragons, impressing in a 33-16 victory against Wigan at Barcelona, will be riding high with confidence.

Without Bird, McIlorum and Tomkins, Catalans will struggle, but they often play well on the big stage so it’ll be a close one. Wakefield by 6.

One of the weirdest fixtures in Magic Weekend history, Hull FC take on Huddersfield in the second kick-off.

Danny Houghton and Sika Manu are back for the black-and-whites as is Josh Bowden after over a year out with an anterior cruciate ligament injury, whilst Huddersfield bring back Alex Mellor into the squad.

Hull FC have been in good form recently, climbing up to fourth in Super League with five wins from seven. Huddersfield, meanwhile, sit in ninth with three wins in seven, but buoyed by their 30-22 victory over fellow strugglers Hull KR last weekend.

The Airlie Birds have lost one of their four Magic games, whilst the Giants have the joint-most victories at the Weekend, with eight from 12 and a current winning run of six.

Hull FC’s recent good run of form should see them have too much for Magic Weekend specialists Huddersfield. FC by 10. 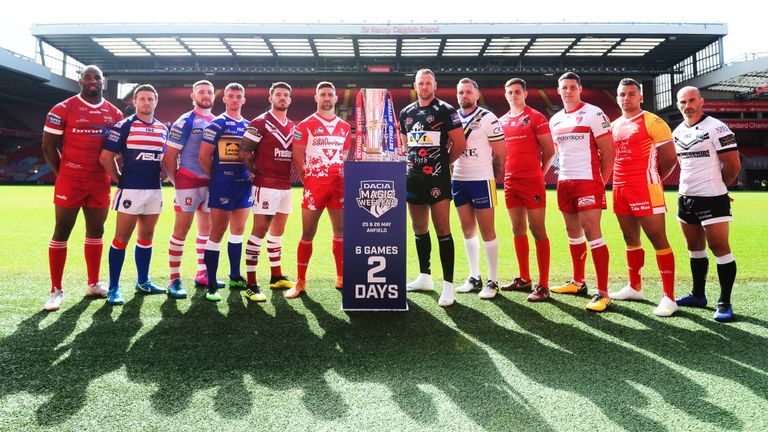 Perhaps the fixture that most people are looking forward to the most, reigning champions Wigan take on Warrington to bring the curtain down on Saturday’s day of magic.

Following a rip-roaring Challenge Cup battle two weeks ago, eighth-placed Wigan will be aiming for revenge over their second-placed rivals Warrington. The latter sit ten points above the Warriors, but are still smarting from their 12-19 loss at home to Hull FC a week ago.

The Wolves had won four in a row before that defeat, but Wigan have won just two from their last eight games. The Warriors, however, are the most successful side at the Magic Weekend, winning eight of 12 fixtures faced whilst Warrington have failed to win the last four times.

Warrington have beaten Wigan twice so far this year – a 25-12 victory in March and the 26-24 Challenge Cup belter a few weeks ago – and the Wolves will be expected to rack up another triumph here. Warrington by 4.

Remembering the Broncos dynasty of the 90’s

Rugby League got it right at the weekend

For those wanting some kind of Rugby League fix, an hour’s long program…