Mal Meninga admits the decision about whether to select Nathan Cleary or Daly Cherry-Evans at halfback is starting to stalk his dreams.

Australia swatted aside the challenge of a determined Italy to progress to the last eight with a 66-6 win at St Helens.

With Cameron Munster rested and watching in the stands, Meninga paired both his number seven options in the starting line-up – though claims he’s not closer to making a decision ahead of a likely last-eight date with Lebanon.

This is not the first great Kangaroo halfback debate – Meninga was an eyewitness to the tussles between Peter Sterling and Steve Mortimer in the 1980s and Ricky Stuart and Allan Langer a decade later.

But there is no doubt this is his toughest call as Australia ended the group stages with 186 points scored and just 14 conceded.

“I had a dream last night about it,” said Meninga. 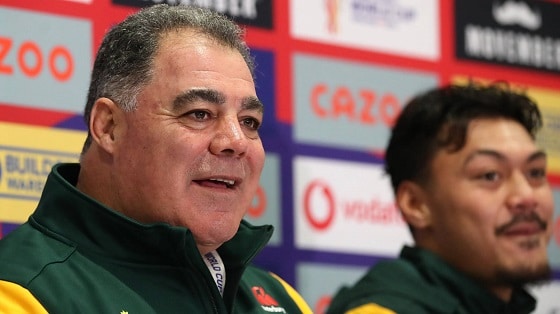 “I’ve got to settle on something very soon, I’ll make that decision and then have an honest conversation with the players.

“Both handled playing together really well and shared the workload well, it worked. We know we can get better when we start to look at our best combinations, the players have handled the merry-go-round with the team really well.

“It’s a tough decision, we all know that. It comes down to performance, training, their off-field behaviour, the balance of the team, speaking to our leadership group, chatting with the coaches. It all marries up to what we value as a team, they are all playing really well.

“We’ll keep on doing the little things we need to do to be successful. Every game we play, we are getting better. We need to be consistent with our preparation. It’s just about maintaining our work ethic on and off the field.

“My plan was from the quarter-finals onwards was we’ll have our best team playing for as long as we remain in the tournament. We’ve got great depth in this footy team, all 24 players are worthy of these positions.”

Italy coach Leo Epifania admits he’s at a loss to solve Meninga’s selection headaches, suggesting he’d save himself a lot of worry by putting the names of his star halves in a hat and picking from that.

Both he and captain Nathan Brown backed Australia to defend their title at Old Trafford but insist there is reason for optimism about the game in Italy, with the 28-4 win over Scotland at Newcastle the highlight of their campaign.

“I’m pretty proud of that performance, the boys put their bodies on the line against a side like Australia and never let up,” said Epifania.

“We could have buckled at any time but we kept colliding with them for the entire 80 minutes.

“We’ve got some class players with some real ability and we’ve worked pretty hard for the last month. We didn’t want to sit there and hope for a break, so the boys really chased it.

“They were down our end for long periods but we didn’t just cop it – we throw back everything we had.”

International newcomer Jeremiah Nanai is the youngest member of Meninga’s travelling party, not turning 20 until early next year. 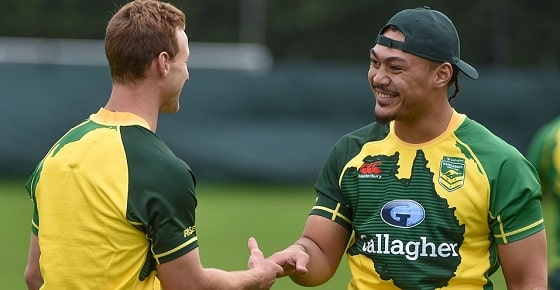 However, he had a stand-out display against Italy, as Australia’s forward unit looked menacing, the Cowboy back-row scoring a late try and causing plenty of headaches.

“I’ve got a lot to work on, I’m still learning and still young. We are all fighting for the slot,” he said.

“This tour is a dream come true, I’ve always wanted to play for Australia. I’m happy and just enjoying my footy.”