The Midlands Hurricanes played their first game under their new identity on Friday 7th January, against York City Knights who hosted the pre-season friendly at the York LNER Community stadium.

Previously known as the Coventry Bears, the reimagined team, which is now backed by Yorkshire-based construction firm Big Red, is aiming for new heights and to establish the Midlands firmly within the Rugby League fraternity.

Looking for ways to diversify and create a regional identity while reestablishing themselves within the professional leagues, CEO Alan Robinson says the rebrand is already delivering new opportunities. The name ‘Hurricanes’ is one recognised by clubs across the Midlands, stemming from the original name for the elite player pathway run by the Rugby Football League (RFL) in Loughborough for a number of years.

Jumping at the chance of investing into the new club, Mike Lomas of Big Red Construction will become Chairman, as well as co-owner alongside Alan. The pair hope to continue the Coventry Bears’ legacy whilst embracing new horizons and what a brand refresh can offer. 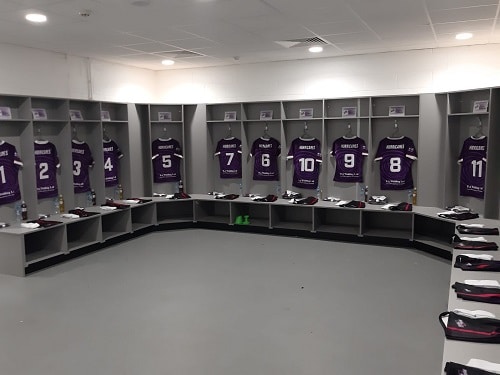 “I am a huge Rugby League fan so when the concept and opportunity presented itself, I was instantly excited that I could be involved in a project like this. I believe that raising the profile of Rugby League in the Midlands area will present a whole lot of opportunity and overall success for the team.

“Alan is incredibly passionate about what he does having ran the Coventry Bears for over 20 years, it has been an amazing journey so far working with him. The Midlands Hurricanes are definitely in good hands!”

“There are really exciting times ahead for us and rugby fans across the Midlands. Our first game of the year as the Midlands Hurricanes represents a huge opportunity to showcase the new club in all its glory. The sky really is the limit!

“Working with Mike has been brilliant. We both immediately shared the same vision of what we wanted for the club and we’re now slowly starting to see it come to life. I’m looking forward to seeing where we can take the Hurricanes!”

The two have an ambition to broaden the predominantly Northern sport into areas with traditionally smaller fan-bases, but with huge opportunity for growth. The new structure adds to Big Red’s reputation for ‘doing things differently’ and will be a key part of Big Red’s ambitions as a business.