Mullhall proving to be a big hit in France

Corey Mulhall is referred to as ‘the jukebox’ by his teammates in Australia because of his big hits in defence.

The backrower from the New South Wales south coast town of Gerringong, where he played his rugby league for the ‘Lions’ is now making a name for himself with Carcassonne in the French Elite 1 Competition.

“After watching his highlights and a few matches, I was sure he would be an asset to our team.

“As a player it took a few weeks (for him) to integrate well into the team, to understand the game plan and the philosophy. He started by playing prop in his first two games in order to work on the basics, run hard and tackle. Then, we positioned him in the second row on the right side.

“He is now very comfortable, and performs every weekend, his runs are very interesting and he gets along better and better with his halfback Clément Herrero. In defense, Corey tackles very hard and confirms all the good that we thought of him.

“The supporters appreciate him a lot and like to see him give big tackles to the opposing players.” 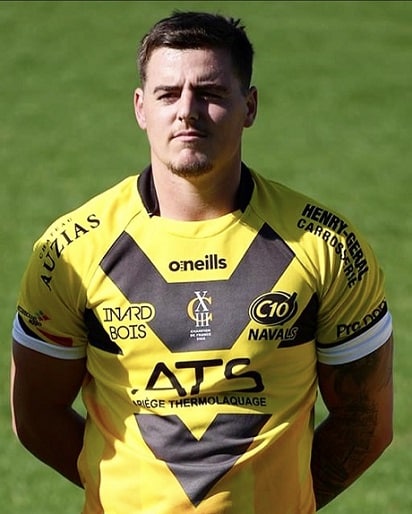 Mulhall is understandably proud of his tackling ability and reveals it is his favourite part of the game.

“I’d like to think I’m not a liability in defence for the team. I enjoy defence the most and hopefully stiffen up the right edge. It’s a good opportunity to see how I go against unfamiliar players who don’t know how I play or defend.”

The NSW Country representative harbored a desire to play overseas for some time but with his wife and two young daughters the 27 year old felt the opportunity may have passed before Endeavour Sports helped him find a place at Carcassonne.

“Life here is a lot different to life back home, we lived on a bit of property and now living in the city. Beau Doosey (playing for VARL in the Elite 2 competition) is my brother in law and is living 15 minutes away in a smaller town called Pennautier.

“The French lifestyle is very relaxed and slow paced. Shops open at 10am and are open till 12pm at night. We are really enjoying the change and trying to embrace French culture.”

While the Australian found communication a little different when he first arrived, he has been impressed with the welcoming attitude he and his family have received from teammates and the community. 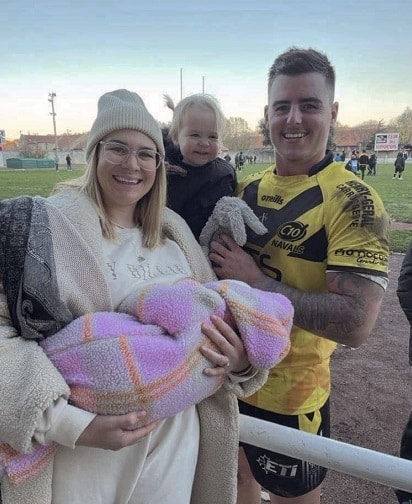 “The French language is very difficult to learn, as there are formal and informal ways of saying things. I have picked up things from just being around the players. They are very patient with my ordinary French. As I’ve gotten to know the players better the more they try to speak English with me especially when we are on the drink. We always try to speak French and when they don’t understand we go back to English and bad acting to get what we want.

“The team are all a great bunch of blokes and the staff as well. Game day at Domec (Stade Albert Domec) , the Carcassonne home ground, they look after my wife and kids with food and watch the game in a warm room. The fans are super passionate and so are the players which is great motivation to turn up week in week out.”

The club that produced legendary French fullback Puig Aubert is enjoying another successful season with Carcassonne currently on top of the table. Mulhall has no doubt his newly adopted team can go all the way and repeat their 21/22 premiership victory.

“Yeah absolutely, I think we can win it. After playing this first half of the season, we are just finding our stride, but still, a lot of improvement in areas are needed.”

“I’m very happy that he (Mulhall) came to Carcassonne and I’m sure he’ll improve further and be even stronger for the finals in a few months,” Camel added.