The Greek Island of Rhodes is reputed to be sunny 300 days of the year. It’s the perfect spot for a holiday break. In fact a number of the national World Cup squad headed to the Dodecanese island for a well earned rest after the tournament last year.

It’s also home to the most successful rugby league club in the Greek domestic competition. Since their debut in 2013, the Rhodes Knights have only ever lost one match, a 26-24 defeat to the Attica Rhinos in 2020, while enjoying multiple premiership victories. An enviable record despite some close calls.

It’s been almost three years since the club has been able to host a home fixture. The global pandemic and the fact that clubs in Athens took a hit with player numbers meant that no team has made the journey (16 hours by ferry or 1 hour plane flight) for some time.

The drought is about to be broken this weekend for what may be Europe’s most isolated rugby league club, as Rhodes prepare to host the Attica Rhinos, their strongest rivals, and provide some clarification on selections for the national team who will play Serbia in Athens on 13 May with all domestic players.

Rhodes Knights head coach Michalis Chatziioannou, who will also coach the national side against Serbia, says his team is very excited about a home fixture

“They missed playing at home with family and friends watching. It has been about three years since we last played at home. There are many boys that will play at home for the first time and I think they will have a great game while their family and friends will be watching them. 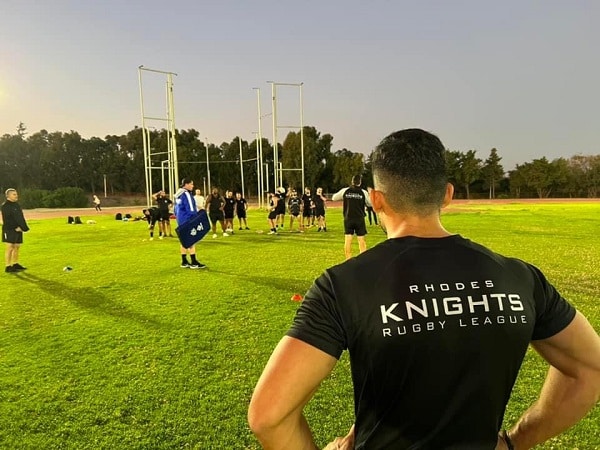 “It wasn’t easy to keep the boys together through Covid. I was trying to keep the team bonded through training and making fun things and talking a lot about game strategies, set plays, etc. At the end of the day we lost a few players but I suppose that happened in every team and sport.”

“Rhinos have developed into a very hard opponent . They are doing a great job. I think it will be one of our toughest games and a good level of footy to watch. I am confident the boys will work it out to victory.”

For Attica Rhinos captain-coach and recent World Cup squad member, Johny Nake, the match against Rhodes presents an opportunity to play in a different environment. He is confident his team can emerge triumphant.

“We love to travel and play on an island such as Rhodes. We’ve traveled so many times in the past to play a footy game there, so I think that helps and we don’t overthink it too much,” Nake explained.

“We’ve done it (beaten Rhodes) in the past, we can definitely do it again. Rhinos have grown much stronger since we met last time and I believe this will be one hell of a game!”

Chatziioannou is hoping the game will also provide some answers in terms of national squad selection.

“It (the match) will help with the selection as these two teams will be the basis of the team. I have some players in mind but I would love to see the effort of new players coming through or older players trying hard to get a spot.”

One thing is certain the island locals will embrace the opportunity to see their boys play at home again.