Wales and England have named their squads for the clash at Pandy Park, Cross Keys and both nations have a host of Test newcomers, including Davies, Collie and Winfield-Hill, who has not only switched sports but countries after marrying England cricketer Lauren Winfield-Hill.

Davies, who is one of six potential debutants in the Wales squad, has previously represented her nation in netball at the 2018 Commonwealth Games, while Collie is poised to become a triple international after playing football and rugby union for Scotland.

Collie is also the first player from the Betfred Women’s Super League South to be selected for England after making an impressive start to the season, including a six try haul in a recent victory over Bristol Golden Ferns.

Winfield-Hill, the 2019 Woman of Steel, is Australia-born and played for Brisbane Heat and Queensland Fire in the WBBL before moving to England in 2018 and taking up league with Leeds Rhinos.

She played for Sydney Roosters at the 2020 NRL Nines before returning to England and the star halfback qualifies for her adopted country on residency grounds.

Wales will field up to six Test newcomers, including 21-year-old Davies, who joined Warrington Wolves this season.

Among them are two who have won caps for Wales in rugby union in the past – Bethan Dainton and Rhi Parker.

Dainton, who has played rugby union for Dragons, Bristol Bears, Harlequins and Barbarians, started playing rugby league last year for the British Army. She has won eight Welsh caps in the union code.

Parker, who has turned out for Cardiff Blues, Bristol Bears and Crawshays in her rugby union career, has won five Wales RU caps. She is new to rugby league this year, having joined Cardiff Demons.

Brittony Price, plus twins Katie and Rosie Carr, all of Bridgend Blue Bulls and Cardiff Demons, are also in line for their first appearances.

The inclusion of Ffion and Sara Jones means that Wales could field two sets of twins in the same match for the first time in the nation’s international rugby league history.

“The players have all worked really hard in training over the last few months, which has made squad selection very difficult for me,” Wales coach Tom Brindle said. 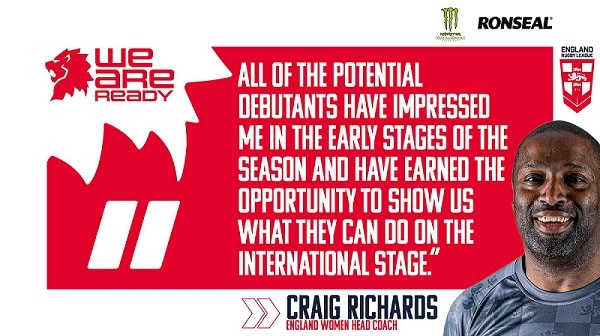 “Most of our squad are Welsh born and bred, which is really important to us as a group, and we’re confident that we will put in a good performance which looks to inspire the next generation in South Wales.”

England coach Craig Richards said: “It is brilliant to be able to introduce so many new and talented faces to the side ahead of this weekend’s trip to Wales.

“All of the potential debutants have impressed me in the early stages of the season and have earned the opportunity to show us what they can do on the international stage.”

Tickets for Wales v England priced at £5 adults and free for children. Get yours here.