In a population of nearly 200 million, it’s remarkable that only football, and to a lesser extent, Rugby Union, have a foothold in Nigeria. Vice-Chairman of Nigeria Rugby League, Ade Adebisi, is determined to change that.

The former London Broncos flyer has already been making waves in his native country, working for free in a bid to get the 13-man code recognised by both the Nigerian government and its people.

“In order to make Rugby League in Nigeria viable we have had to take the ‘Go Big or Go Home’ approach. In Europe, you can incrementally grow a sport – that approach wouldn’t work in Nigeria.” he told Everything Rugby League

“Just from a legal point of view, you need to get government approval to start a new sport.  That is what myself and Martin Crawford (Director of Rugby) have been doing for the previous three years in Nigeria. We have been Teaching both codes of Rugby in schools with the iTry programme and speaking to the right people in government”

Adebisi is not just fighting professionally, he’s also fighting personally. The 32-year-old suffers from the genetic blood disorder sickle-cell disease and is the only known rugby player to ever play professionally with the condition. He is an ambassador for the sickle cell society and the founder of the Ade Adebisi sickle cell foundation, and Adebisi claims if it wasn’t for his ship-shape condition as a Rugby League player, he would not be here today.

“It has allowed me to educate people about Sickle Cell at the same time, a condition I suffer from. Under ordinary circumstances, I would not be living the life I have today if it was not through conditioning my body as a Rugby League player” he stated.

Sickle cell anaemia means Adebisi produces unusually-shaped red blood cells that can cause problems because they do not live as long as healthy blood cells and they can become stuck in blood vessels. But with the disease comes the stigma – something which Adebisi is intent on eradicating.

In a rather refreshing fashion, Adebisi has revealed his major plans for Nigerian Rugby League, both domestically and internationally.

“This year we need to put on a stadium-based televised international Rugby League tournament for Nigeria. Between now and that happening we will be launching a ten-team domestic competition that will provide the bulk of our playing squad. That will create enough momentum to grow Rugby League in Nigeria.

“As well as the senior competition, we are introducing a schools league of over 60 schools and looking at creating a University league that will involve 25 teams” Adebisi said.

Unlike most international Rugby League sides that try and battle other sports for media hegemony, Adebisi is keen on working together with the likes of football and rugby union to expand sport as a whole in Nigeria and Africa.

“Nigeria has one of the least crowded sports environments with only Soccer having any real presence. The opportunities to play Soccer are few and far between in a country of 200 million people. Rugby Union has a good footprint in Nigeria, which is helpful as Rugby League is not alien to Nigerians who play Rugby Union. People are already fans of Martin Offiah.”

“As a sports body, we want to work with sports like Rugby Union and Soccer, it’s about doing something positive for Nigeria and Africa. In a country the size of Nigeria, there is plenty of room for new sports. You only need to take a look at our board of directors to see how respected figures in Nigerian Rugby Union are happy to be involved in Rugby League. We are already talking to people involved in Soccer to provide a second chance for lads who won’t go on to be footballers.” 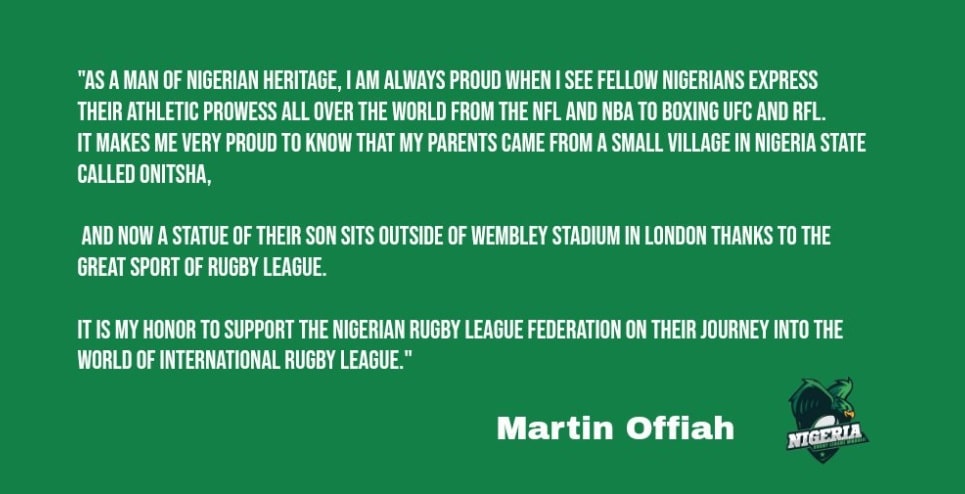 Super League stars such as Sadiq Adebiyi (London Broncos) and Tuoyo Egodo (Castleford Tigers) and the NRL’s Jayden Okunbor are of Nigerian heritage and Adebisi is adamant that there is the talent in Nigeria for that to increase.

“The Nigerian Rugby League is running a domestic competition with the bulk of the national squad coming from that. The spine of the team, about four or five players, will come from the professional ranks and the other positions will be made up by players coming from the domestic league.

With links to some Super League clubs already – Eko Trinity and Lagos Rhinos – there is nothing stopping Adebisi and Nigeria taking Rugby League by storm. 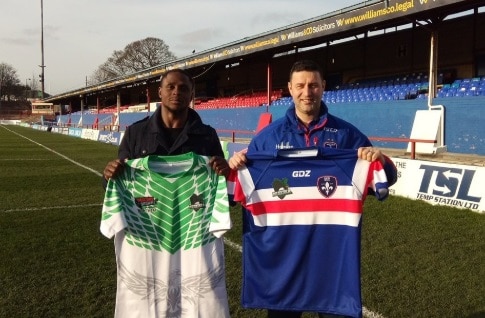 “I think people will be surprised by the scale of our ambition. The sport has some very smart people who are aware of how Nigeria Rugby League opens up a new market into Africa. Nigeria is the largest economy in Africa.”

Adebisi’s eventual aim is to see his nation qualify for the 2025 World Cup, but the planning for that starts now with the Middle East and Africa Championship in October 2019. Nigeria will do battle alongside Ghana, Cameroon – who are making their own debut – and Morocco.

Not only will this test out Nigeria against potential rivals, it also provides a pathway to obtain affiliate membership of the Rugby League International Federation as playing international games is part of the criteria necessary to join. This tournament could be the catalyst for the sport to grow and push for a spot at the 2025 World Cup.

“It (the MEA) turns an unknown sport for most people into a big deal. It’s as much about offering an event as it is playing a Rugby match. It brings in the patrons and sponsors that will make Rugby League happen in Africa in a very real sense. We are talking four games in a ten thousand capacity stadium with the matches being shown on Super Sports in Africa. We will literally be putting International Rugby League into Nigeria’s living rooms. I don’t think you can do much more than that.”

“We are serious about trying to win the Middle East Africa regional tournaments and if everyone does their job we will be at the World Cup in 2025.”

This isn’t some pipedream thought up on a whim, there is real hope that Adebisi is starting something special. With sponsors in Africa ready to get on board with an educational programme and a deal with sports development agency Ballympics already announced, the interest seems tangible.

“We are talking to a lot of blue-chip companies and people involved with the Commonwealth. Support is coming from notable figures in the Nigerian business world who want to see us succeed. We are offering Nigeria something new, young and positive to buy into.”

“The support that came from the sportswear company Beastwear has been amazing.

“A large part of our job is working with the media to get the message to them. It is essential that Rugby League learns to be bombastic when it comes to International Rugby League.

“I think the most Nigerian aspect of our approach to Rugby League will be our international shirt launch that should go on general sale in a few weeks.

“We have brought in the most impressive looking athletes and are having an original music score made for the commercial we are going to be putting out in Nigeria. We want to be the best-looking team on the field when we play and the Nigerian public wearing our shirts in nightclubs” he said.

With all the doom and gloom creeping into the sport lately, it’s so pleasing to see that there are people out there determined to grow Rugby League. A charismatic person and an eloquent speaker, Ade Adebisi has set forth his plans to bring Nigeria to the centre stage. And, like the aptly nicknamed Nigerian football side – the Super Eagles – the green-and-white flagged nation is ready to soar.

England looking to poach Radley and Walker for World Cup