On the 18th of February the Panthers will take on St Helens in the first-ever World Club Challenge to take place in Penrith.

This event has been three years in the making as the World Club Challenge has not taken place since 2020 due to COVID.

Penrith has shown how committed they are to this epic clash that will determine the world champions recently when their Rugby League World Cup Final representatives returned to training earlier than required so that they can take part in the game.

Nathan Cleary, Stephen Crichton, Spencer Leniu, Jarome Luai, Liam Martin, Izack Tago, Brian To’o and Isaah Yeo we’re all expected back at preseason training on the 16th of January which would have prevented them from playing in the World Club Challenge as the recent Collective Bargaining Agreement’s health and safety guidelines prevent any player from participating in their first game back from the offseason unless they have trained for at least six weeks.

Panthers chief executive Matt Cameron has spoken to The Sydney Morning Herald about the sacrifice these players have made to play against St Helens on the 18th of February.

“The Panthers had a number of players represent their home nations at the most recent Rugby League World Cup with eight of our squad playing in the final,” said Cameron. 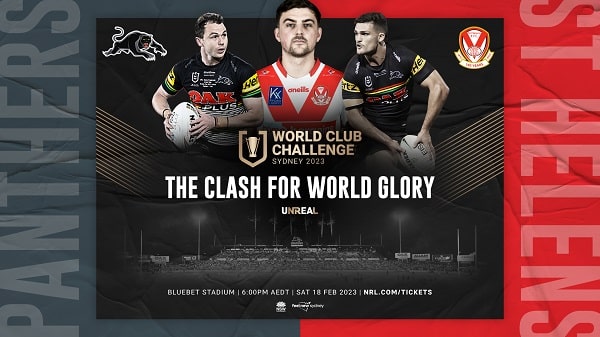 “Although they are back at training, the club still has a responsibility to ensure they are match ready in time for the World Club Challenge and will be doing everything possible to get our best team possible on the park.

“It speaks volumes for the culture of this team and the character of the individuals.

“They didn’t have to come back to training, but once again – as they have done throughout their careers – they’ve put the club and the team first.”

Penrith is committed to fielding their strongest possible team for the World Club Challenge which shows how seriously they are taking their opposition and for good reason.

St Helens became the first team in the Super League era to win four straight league titles and will be favoured to win five in a row in 2023.