Josh Papali’i has become the latest State of Origin star to confirm his allegiance to Toa Samoa for the upcoming World Cup.

The Queensland prop also says the Pacific nation is set to be further bolstered by more big name NRL players committing to the cause.

Papali’i, who advised Kangaroos coach Mal Meninga of his intentions during the recent Origin series, said there was a groundswell of players wanting to represent their Samoan heritage and he wanted to be involved.

“As an older player, I feel like it’s a movement I just don’t want to be missing out on,” Papali’i said in Canberra on Wednesday.

“Just seeing the likes of a few of the Penrith boys coming out and I’ve had few text messages from other players who haven’t come out yet saying they’ve put their hand up for Samoa.

“I have put my hand up to play for Samoa. Mal Meninga knows that and I’ve had a coffee with Mal as well to speak about what I’m planning to do … but that’s a long way from here, anything can happen in the next hopefully eight weeks.” 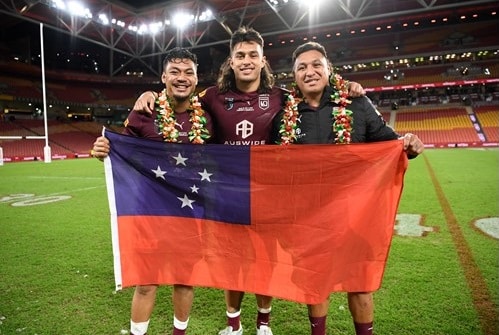 NSW Origin stars Jarome Luai and Brian To’o are among up to seven Panthers players set to represent Samoa at the World Cup and Papali’i will bolster a forward pack that already includes the likes of Martin Taupau, Josh Aloiai and Jayden Su’A.

Papalii demonstrated his pride in his heritage when he posed with a Samoan flag alongside Maroons team-mates Tino Fa’asuamaleaui and Jeremiah Nanai after winning the July 13 Origin decider in Brisbane.

Fa’asuamaleaui and Nanai are expected to play for Australia but Papali’i said there were other players eligible for Samoa who were yet to announce their World Cup intentions.

The 30-year-old Raiders star represented Samoa at the 2017 World Cup and has played 11 Tests for Australia, as well as 23 Origins for Queensland.

“I guess probably my last World Cup wasn’t the best.” he said. “I sort of treated it as a little vacation and probably drank a bit too often, and ate more than I should have,” he said.

“I’m looking to just play a bit of World Cup for the Motherland and represent my wife and my kids and especially my parents as well and just make Samoa proud.”