PDRL is a full contact version of the game, adapted for participants with a physical disability who want to access a running version of Rugby League. England’s 20-player squad is drawn from foundations linked to five Super League clubs: Castleford Tigers; Leeds Rhinos; Wakefield Trinity; Warrington Wolves and Wigan Warriors.

The side will be captained by Leeds Rhinos’ Scott Gobin. Looking ahead to the landmark day, Gobin said: “I’m really excited, this isn’t something that comes around often. To be a part of England’s first ever PDRL World Cup team is absolutely amazing.

“To be named captain means everything to me. I always wanted to be a professional Rugby League player and to represent my country, but it wasn’t possible because of my disability. Now I have this opportunity to captain my country in the PDRL World Cup – it’s what dreams are made of.”

The England skipper is also fresh off the back of a successful season with his club, Leeds Rhinos. After securing the 2022 league title, Gobin is hungry for more success. “Winning silverware in the domestic Grand Final just makes me want to win even more. We were just getting better week in week-week out, so to carry that form and momentum into the World Cup is important, and will put us in a good position.” 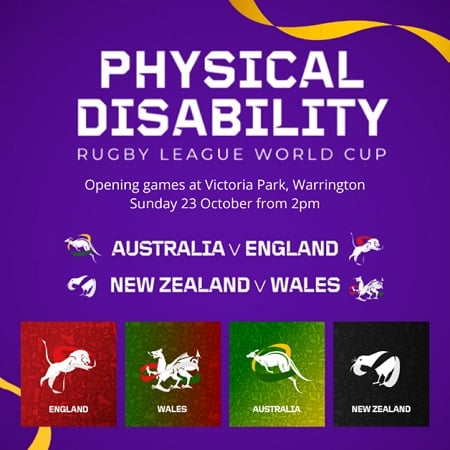 PDRL was initially developed in Australia, arriving in England in 2018 when Warrington Wolves and Leeds Rhinos played the first ever game of PDRL in the northern hemisphere. Governance of PDRL is in line with Paralympic sport and international disability competition. The game includes full contact tackles, though players who have a disability that restricts them from playing full contact safely are permitted to play Touch RL tackle rules and are identifiable by their red shorts.

England team manager, John Welch, adds: “Being part of the RLWC is amazing, and I know all of the players and staff are really excited about showcasing our sport to the world. Who doesn’t dream of walking out onto any sporting field and wearing their country’s shirt?

“Since our inception five years ago, the plan was to make our variant of the sport as accessible as possible, and for it also not to be a short-term option for our athletes. The idea was to set a platform to engage with people who had either never played the sport, or were lost to it due to their disability.

“I will be so proud to walk out onto that pitch and watch our boys play against the best that Australia, New Zealand and Wales have to offer, and I know that anyone new to our sport will be amazed at the skill level and the passion shown for the badge. I cannot wait!”