Kai Pearce-Paul is readying to make his debut for England and his first appearance of the World Cup this weekend against Greece.

“I almost couldn’t believe my eyes when I first found out that I was playing,” Pearce-Paul said.

“It just put a weird feeling in my belly. It’s just something that when you’re growing up, watching the TV, you want to play for your country.

“I’m sure being able to represent your nation is an aspiration I’m sure every sportsman has. It’s hard to explain how I’m feeling but I’m very excited to get on and show Shaun what I can do.

“Excitement has grown watching more and more of the games, seeing how intense and high level the games are, especially with the performances we are putting in.”

England have started the World Cup in impressive fashion, thrashing Samoa and then defeating France.

“We’ve put in some good points and good tries, having great games against some very strong teams,” Pearce-Paul said.

“For me it’s about adding to that because I don’t want any level to drop. I want to add what I can to the game and do the best I can.

“It’s something I’m embracing. Training with the boys week in week out, you sort of get that trust in each other.

“It’s a very strong group, with a good culture around the team. The boys can only put their trust in me, in the same way I put my trust in them.”

The 21-year-old says he is not feeling pressure ahead of his World Cup bow. 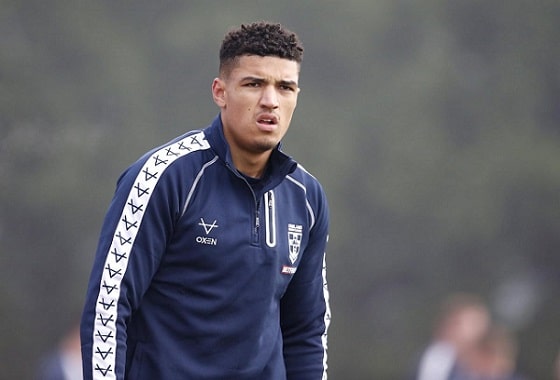 “I wouldn’t say there’s much pressure, I just want to add everything I can to the game,” he said.

“Shaun (Wane) is the most honest guy you could ever meet, he’ll tell you exactly how it is. He did that in the first two games, and I couldn’t respect that anymore .

“He’s told me I’ll get my shot this weekend, and all I can do is my best.

“Being given this opportunity and being in the 24-man squad alone is a massive achievement, and it’s something I’m grateful for. I suppose playing well will be my way of paying Shaun for selecting me in the first place.”