Arguably the most remarkable thing about Red Star Belgrade rugby league forward Sam Herron is how fast he is.

At 188 cm and 102 kgs, the pipefitter from Falkirk in Scotland looks like he could run through brick walls. Highlights of his games on YouTube reveal a number of long range tries down the fringes of the field with opposing backs unsuccessfully attempting to chase him down.

Having coached a team assigned with the task of tackling the big Scot, this correspondent can attest to the defensive challenge he poses with the ball in hand in open spaces.

“I guess I’ve always had speed but I had to learn to use it effectively. I also played football (soccer) when I was younger and naturally as I was bigger than other players I got put in the centre back position and was even a back up goalkeeper when needed, but when my team realised how fast I really was I got put into a striker/centre forward role as I could outmuscle and outrun most other defenders.

“When I started playing senior rugby at 16 I had to use my speed rather than my strength and size as I was playing against fully grown adults. I think even now it’s very deceptive for me because teams expect this big crash ball runner that just runs into players and that’s that, but then I get a bit of space and it’s all over from there,” Herron explained to Everything Rugby League.

After switching from rugby union and representing Scotland against England Under 18s, Herron’s rugby league adventure took him to Mittagong in the Southern Highlands of New South Wales before he joined Red Star.

“After playing in the Student World Cup in 2013 a few of the Australian lads told me that if I ever get the chance to get over there and play I could make it pretty well so I set my sights towards that and went from there. I made contact with (Player recruitment agent) Luke Srama about helping me find a team in Australia and I finally settled on Mittagong after having a series of offers.

“To be honest he (Srama) has been fantastic in so many aspects and even once he finds you a place to go he’s always seeking updates on you and making sure things are good with life. He was also the one that contacted me about Red Star after I told him that I couldn’t play for his team in Australia this year due to some stuff I had to take care of back home.”

“The ability to travel to different countries and play is always very exciting and when you get to do it in places which are known holiday destinations for a lot of people then it’s just that bit better. Every trip to a different country is always a lot of fun for the team.” 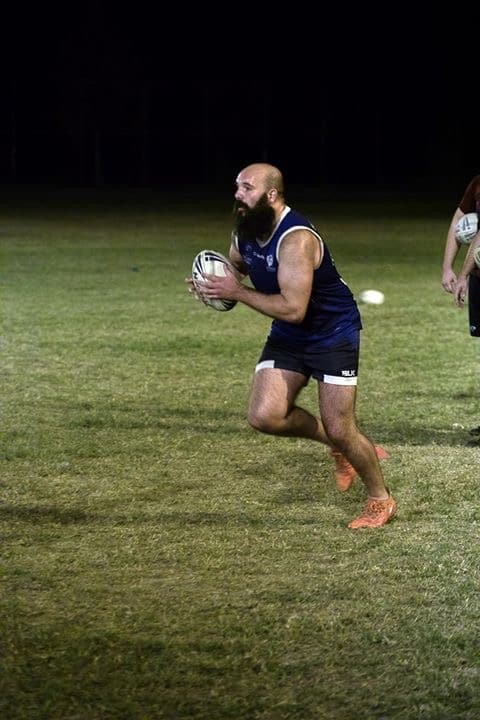 Herron along with South Sydney junior Jack O’Brien are part of the overseas contingent that have joined the Red Star squad to assist in development. Flamboyant ex-American football player Monte Gaddis also enjoyed a stint with the club earlier in the year.

“I think with every club that imports players there is a high expectation of them but it can be for different reasons. I think with Jack and myself this year we were definitely brought as leaders with experience to help the players on the squad up their game to the standard it needs to be at as well as giving the extra edge that was needed to make a clean sweep of the trophies.”

Another shrewd addition to the Red Star family recently has been respected ex-Gold Coast Chargers mentor Phil Economidis who joined the club as Head Coach in September.

“Phil’s knowledge of the game and of players ability is unparalleled. He isn’t afraid to criticise you and makes you do something till you get it right, honestly he is the best person I’ve ever had to coach me so far in my career.

The 24 year old has a burning desire to play for his country at the senior level after previously representing the Bravehearts, the Scotland A representative team in 2014.

“I think every person has an ambition to represent their country at the highest possible level, and having done so for mine at every level apart from full international I think that’s the one thing I need to prove to myself I can do.”

Herron is currently weighing up his options for next season after receiving some outside interest.

“I’ve had some people contact me about next season in various different places but I have nothing set in stone yet.”

The opportunity to be part of Red Star’s debut in the Rugby League Challenge Cup in 2019, an initiative recently announced by the club’s progressive management, may persuade him to stay in Belgrade.

“It really is a great honour to play for a club within a sporting society that has such a great reputation throughout multiple different sports. Everyone is very passionate about playing for the club, it just shows that it really is more than just a club, it’s a family.”