The Women’s Rugby League trophy will be lifted for the sixth time at Old Trafford on 19 November 2022.

When the tournament is over, fans of rugby league and women’s sport will hopefully reflect on a competition that has changed the face of women’s rugby league forever.

The women’s competition will be a real global celebration of the sport. With the introduction of tournament debutantes Brazil there will be teams from four different continents taking part for the very first time.

Eight teams in total, a record high for the World Cup, will compete for the chance to lift the trophy, highlighting the continued growth of the game across the world and bringing an incredible vibrancy to the tournament.

The competition favourites undoubtedly come from the Southern hemisphere in the form of current holders Australia, and three-time winners New Zealand, though England will have strong hopes of gate-crashing the party and reaching the final for the first time in their history.

Brazil will represent South American interests and will be joined by Papua New Guinea and Canada in England’s group. 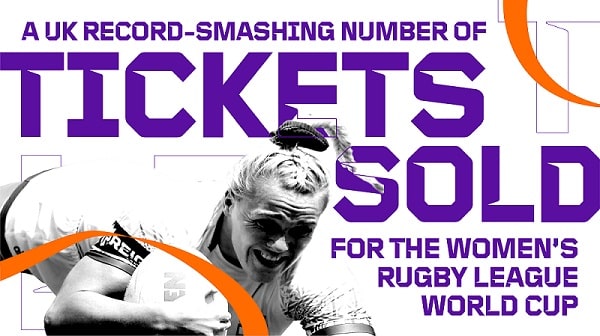 Group B will see a mouth-watering clash between Australia and New Zealand, the only two teams to have won the competition and they will be joined by France and the Cook Islands.

Appetite for the women’s tournament is undoubtedly high with over 5,000 tickets sold for the opening match between England and Brazil, which is already a record number of people in attendance for a women’s rugby league match in the UK.

Off the pitch fantastic progress is also being made. The women’s teams will receive prize money for the first time in tournament history with equal participation fees in place across the women’s, men’s and wheelchair teams.

In addition, every single fixture will be broadcast live on the BBC offering an incredible platform to put the women’s game in front of a huge broadcast audience and hopefully inspire the next generation of female rugby league players.

Perhaps most excitingly the final of the women’s competition will take place on the same ticket as the men’s final at Old Trafford on 19 November ensuring that the two teams competing for the trophy will do so in front of a packed house at one of the most iconic sporting venues in the world.

Be there to see the sport’s biggest stars come to England, get your tickets at RLWC2021.com/tickets