England will face Samoa in the opening game of the 2021 Rugby League World Cup on Saturday afternoon at St James’ Park in Newcastle. Here is a look ahead to that fixture.

Shaun Wane has announced his 19-player squad which will face Samoa on Saturday afternoon.

John Bateman misses the contest due to suspension. Meanwhile Andy Ackers, Joe Batchelor, Mikolaj Oledzki and Ryan Hall are the others who have not been named by Shaun Wane.

England played their final warm-up match last weekend at the AJ Bell Stadium in Salford. Dom Young was arguably one of the most impressive players during the 50-0 success. Young scored an acrobatic try and also assisted scores for George Williams and Kallum Watkins. The winger looks set to receive his first cap.

All six of the NRL based players have been named in the 19 strong squad. Along with Young, Herbie Farnworth and Victor Radley could receive their first caps. Meanwhile the experienced Tom Burgess, Elliott Whitehead and Luke Thompson have all been selected.

England captain, Sam Tomkins is named in the squad by Wane. Tomkins did not feature last weekend against Fiji but is in contention to feature. 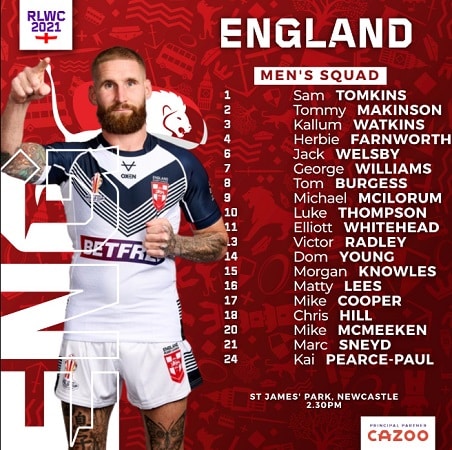 Experienced forward Chris Hill is one of five players in the squad with at least 20 England test caps. Tomkins, Burgess, Whitehead and Kallum Watkins are the others who fit that category.

Half-back, Marc Sneyd has been named in the final 19 for Saturday. The 31-year-old is uncapped and could make his test debut at St James’ Park.

Samoa have named a side which has an array of NRL stars, including many who featured and won the NRL Grand Final for Penrith.

Uncapped Stephen Crichton made his impact on the final scoring a try. Fellow Panthers, Brain To’o and Jarome Luai also have been named for Samoa on Saturday. Meanwhile, prop Junior Paulo featured for Parramatta in the Grand Final, he is expected to start in the forward pack for Toa Samoa.

English fans will be aware of the threat hooker Danny Levi can bring. Levi has been playing for the Huddersfield Giants in the Super League; however, he will be returning to the Southern Hemisphere after the World Cup is over.

Anthony Milford could have a big say in the halves. Milford has made eight appearances for Samoa, including featuring in the 2013 World Cup and playing against England during the 30-10 defeat in 2017. Milford has over 200 NRL appearances to his name. 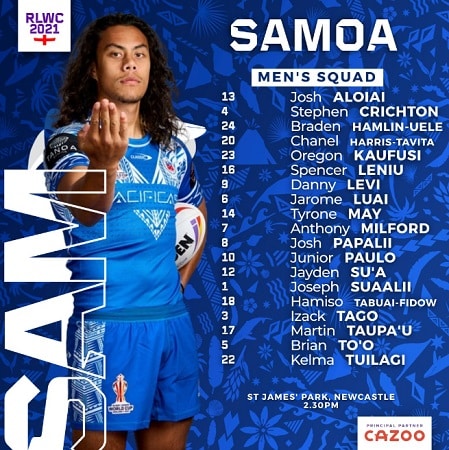 Samoa will be looking for their first victory in four matches against England. Matt Parish has arguably the strongest Samoan side in their history, which includes eight players who featured in the NRL Grand Final and players who were in contention of being selected for Australia.

The game gets underway on Saturday at 2:30PM at St James’ Park in Newcastle and will be shown live on BBC One.