Following Samoa’s famous win against England last weekend fans of all nations are jumping on their bandwagon with the underdogs just 80 minutes away from history.

One person, in particular, will not be getting behind Samoa as they take on Australia in the Rugby League World Cup Final though and that is former Kangaroos legend Glenn Lazarus.

Lazarus represented Australia on 23 occasions and even won a World Cup in 1992.

It isn’t that the 56-year-old is necessarily supporting one nation or the other but he simply does not believe Samoa can beat Australia.

The former forward recently appeared on the SENQ 693 Breakfast radio show and revealed why he does not think Samoa can win.

“Samoa will be absolutely desperate to win it,” Lazarus said.

“I do not think that they will beat Australia.

“I don’t think their defence is good enough.

“It’s great that they’ve made the final and England will be ruing the opportunity (to play in a final at home).

“It will be a great game but I do think Australia will win.”

Throughout the tournament Samoa has conceded 112 points, 60 of which came in their World Cup opener against England.

Australia have only conceded 32 points so far.

If Samoa’s defence is to match Australia’s in the final then they are going to need their captain Junior Paulo to play at his best.

For the second week in a row Paulo has escaped a ban for a dangerous tackle on England’s Tom Burgess and has taken to his Instagram page to express his and his teammate’s gratitude to the fans.

“I don’t know if I have the words to describe how much it means,” said Paulo. 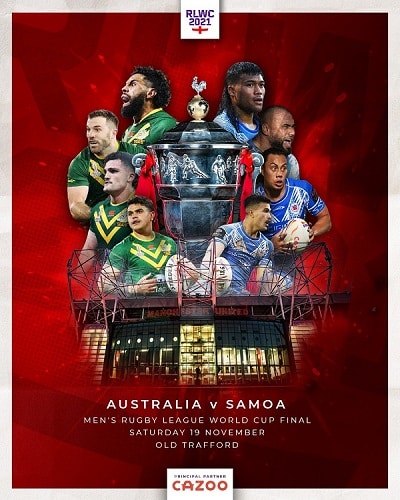 “Every single Samoan around the world is going to be proud of what we achieved.”