Manly star Josh Schuster is set to follow in the footsteps of his famous uncle John Schuster after being one of 12 Test debutants named in the Toa Samoa squad to play Cook Islands.

Schuster, who plays backrow for the Sea Eagles but is expected to take over the five-eighth role next season, is a third generation Samoa international as his grandfather David represented the Pacific nation in rugby union.

Uncle John played 10 Tests for the All Blacks before switching codes to join the Newcastle Knights and he also represented Samoa at the 1995 Rugby League World Cup in England – a goal now within Josh’s reach after his selection in the 20-man Pacific Test squad.

Despite being chosen in an extended Kiwis squad announced at the start of the season, Schuster is one of the many rising NRL stars to commit to Samoa – along with the likes of Penrith Panthers quartet Izack Tago, Taylan May, Charlie Staines and Spencer Leniu.

Panthers team-mates Jarome Luai, Brian To’o and Stephen Crichton are also considering playing for Samoa at the World Cup but will wear the blue jersey of NSW instead during the stand-alone representative round as State of Origin II is in Perth on June 26.

“We are proud of all players with Samoan heritage who are playing in all teams in the upcoming Representative Round,” Parish said.

“Out of respect to the players involved in State of Origin, we did not consider any player chosen in the NSW or Queensland squads for Game I but if they were to become available for the Pacific Test we would consider late changes to include them.” 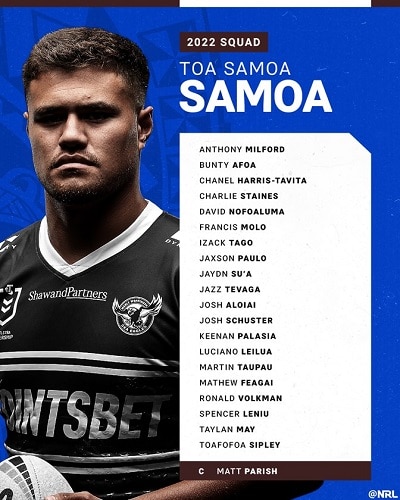 The move has created opportunities for other players to represent Samoa and highlights the depth of talent likely to be available to Parish and his coaching staff at the World Cup.

Tago, May, Staines and Leniu are among the players set to make their Test debuts for Samoa, along with Manly’s Josh Schuster and Toafofoa Sipley, and St George Illawarra’s Francis Molo and Matt Feagai.

The international game has been put on hold in the Southern Hemisphere since the outbreak of COVID-19 in early 2020 and Parish said it was exciting for Samoa to again be involving in the Pacific Test.

To underline the significance of the Test, assistant coach Richard Agar and cultural and wellbeing manager Fereti Tuilagi will travel from England to join the squad in camp next week.