Shaquai Mitchell made headlines last year when he made a return to Rugby League by signing with the South Sydney Rabbitohs where he would join his brother Latrell, playing two games for the Bunnies in the Knock-On Effect New South Wales Cup competition.

It has become hard for Mitchell to hold down a spot at that level of the game though and he has not looked like making his NRL debut at any point, in large part due to the time he spent away from the game which unfortunately led to the 25-year-old gaining a substantial amount of weight, reaching 167kgs at one point.

Upon his return to the game last year, Mitchell was heavily criticised for his weight but has now turned things around ahead of the 2022 NRL season, with the forward dropping 25kgs over the Summer, and Rabbitohs head coach Jason Demetriou has confirmed to the Sydney Morning Herald that this change has increased his chances of making his NRL debut at some point this year. 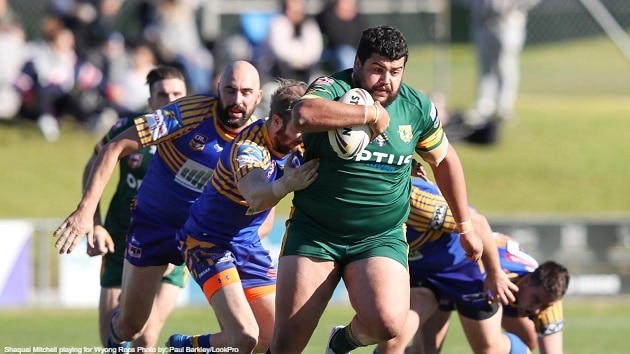 “He [Mitchell] still has a fair bit of work to do, he knows that, and this pre-season wasn’t about him trying to prove to us he will be ready to play in the NRL in round one. It was about him showing us he’s on the right path and potentially able to play in the NRL,” said Demetriou.

“He played in our NSW Cup side last year, he wanted to give his footy career another crack, he lost a lot of weight and we saw enough in him to give him a full pre-season to see what kind of shape he can get himself into.

“To his credit, he’s been first class, dropped a lot of weight, moves really well and has good skill levels for a big man – his skill level is as good as any one of our middle forwards.

“Shaq understands the opportunity in front of him because he didn’t make the most of the one he had before. It doesn’t matter if you succeed or fail, it’s a matter of making sure you don’t live with any regrets.”

It is believed that there is a strong chance Mitchell will be selected by Demetriou to play for the Rabbitohs in their upcoming Charity Shield match against the St George Illawarra Dragons, a fixture that the Rabbitohs have not been defeated in since 2012.

A good performance by Mitchell in that game will go a long way in him potentially setting foot on an NRL field in 2022.