INDIA will make its first significant strides in rugby league on Sunday 14 July, as players from around the world travel to Brisbane for a debut international match against Colombia.

India will also draw a large percentage of its squad from Auckland’s Ethnic Rugby League competition in New Zealand.

They will face a Colombian team currently ranked 41st in Rugby League International Federation standings, boasting a record of one win and four losses since debuting in 2017.

The Colombian team is also drawn from far-and-wide, but features only one player not born in Colombia itself – prop Andrew Zuluaga.

Zuluaga, who qualifies via his father’s birthplace, was previously a member of the USA national squad, but has been in Australia the past two years playing in the Townsville and District Rugby League.

Colombia’s squad will be captained by half Alex Eastman – born Ernesto Lamprea and adopted as a baby from South America before being raised in Australia.

Teammate Daniel Rickard, born Daniel Gonzales Lenis and also adopted from Colombia as a baby, will play alongside Eastman for the first time in a meeting of two players who have travelled a remarkable path.

Rickard, who has represented the Narangba Rangers, Beachmere Pelicans and Burpengary Jets in league, was only recently reconnected with his birth mother through the detective work of his Colombian teammates. 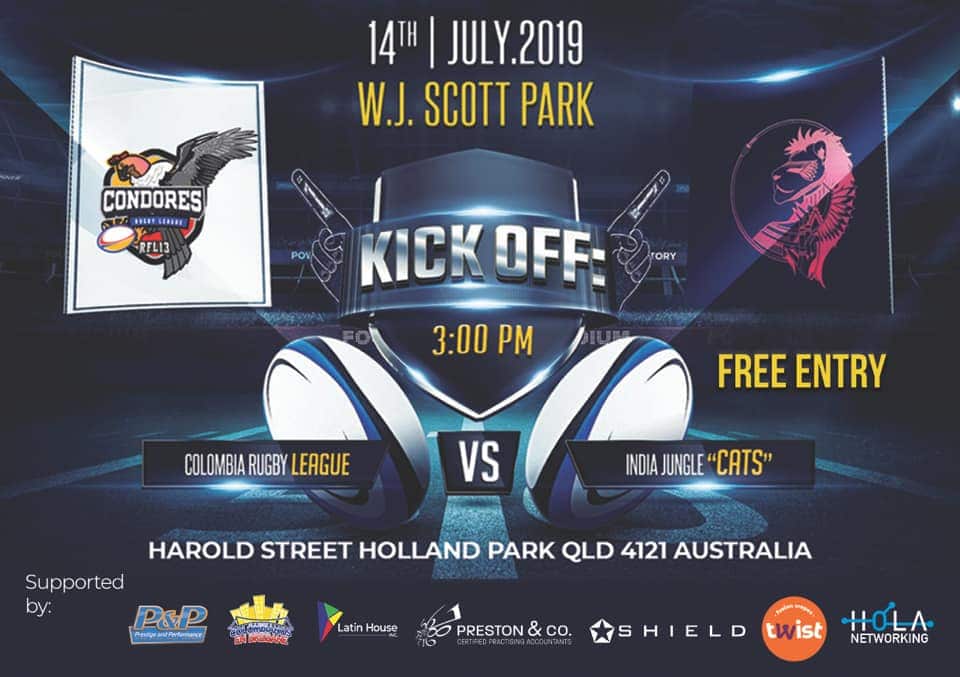 Another key player for the Condores, hooker Sebastian Martinez, is fresh from selection in last year’s Emerging Nations World Championship team of the tournament.

A junior Wide Bay Bulls representative, he played alongside Patrick Kaufusi and was briefly scouted by the Manly Sea Eagles in his youth.

One of the more interesting backstories to the clash is the childhood friendship of Martinez and Indian skipper Samra.

The pair both studied and played rugby league on the Sunshine Coast before moving to Brisbane and graduating as a physiotherapist and exercise physiologist respectively.

Their determination to stage an international between India and Colombia was consolidated after they travelled together to the USA as medical staff for the Chilean Rugby League team in 2018.

Sunday’s match will feature music from both the Indian and Colombian communities from 2pm, prior to kick-off at 3pm at Scott Park, Harold Street, Holland Park, as well as performances at halftime.