Zack Wilson takes a personal look at six things he’d like to see in 2019 rugby league season in the Northern Hemisphere.

1. Proper games for Wales, Jamaica, France and other non-Tier One nations

Wales, France and Jamaica have sealed their places at the next World Cup. They now have no fixtures scheduled this year as a result, which is just daft. All three teams need games if they are to progress and build squads that can do well at the World Cup. One of the main problems that international teams have at World Cups is that they have not played together often enough between tournaments. A three-way tournament between Wales, France and Jamaica, perhaps held in Cardiff to showcase the game, would be a great thing to see to help plug the yawning gaps in the international schedule

Another yawning gap is, of course, the absence of any concrete fixtures for the Great Britain team in 2019, despite there being a tour of the Pacific scheduled, allegedly. If the RLIF and whoever else is involved could get this sorted pretty quickly it would be good. Fans need to save money to buy tickets and time to make travel arrangements. This constant waiting for news is something that doesn’t happen in other sports which have true international competitions. This tour could be a real boost for international rugby league, especially in the UK. If the tour ends up being poorly organised, or not going ahead at all, then yet more credibility is drained from our sport.

One of the real success stories of UK rugby league in 2018 was the expansion of the women’s game. A growing women’s competition helps bring new people into the sport, and also helps rugby league to catch up with sports like football and rugby union, whose women’s games have acquired national profiles over the last few years. Women’s rugby league is a good opportunity for the sport to progress. If it messes up the opportunity then that will be a pretty good indicator that the sport is in serious trouble and will have problems surviving.

4. A team from outside the big three wins Super League

For the sake of interest, it would also be nice to see a team that wasn’t Wigan, Leeds or St Helens win the Grand Final. Catalans won the 2018 Challenge Cup, and, it could be argued, gave the old competition a real shot in the arm. It would be great for the sport if a team like Castleford, Wakefield, Catalans or one of the Hull clubs could go on a run and maybe ‘do a Leicester’ in 2019. It would certainly help to freshen up what looked a tired and stale competition at times in 2018.

The Challenge Cup this year features three names which will cheer the hearts of anyone committed to the idea of international expansion. Scotland’s Edinburgh Eagles will travel to West Yorkshire to face Normanton Knights, Serbia’s Red Star Belgrade travel to Millom, and Ireland’s Longhorns will go to Castleford to face Lock Lane. If one of those teams were able to pull off an upset and seal qualification for the next round of the competition it would give the game a nice publicity boost, as well as giving credence to the sports pretensions towards international expansion.

6. People get perspective, realise where we are and adjust to reality

This last one is a little more complex than the previous five. But what is meant is that rugby league fans in the UK should pause, look at where the sport really is at the moment, and temper expectations accordingly. Rugby league at the moment is in serious decline, and could well disappear in its current form over the next decade, simply due to economics. We need to understand that we are not a big sport anymore, and haven’t been for a number of years. We have to start again, and almost build the sport anew from fresh foundations. Much of what made rugby league what it was in the past no longer exists. We have to adjust to this new reality, and many are finding it really difficult. Once we face that reality, we can come up with plans which work. Until then, we are just labouring under a series of damaging delusions. 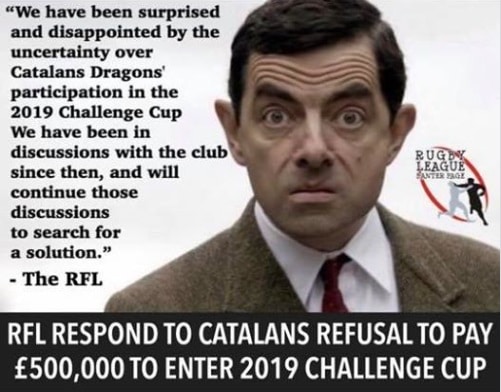